The people from various walks of life have been agitating since August 21 after a spate of deaths in the area. 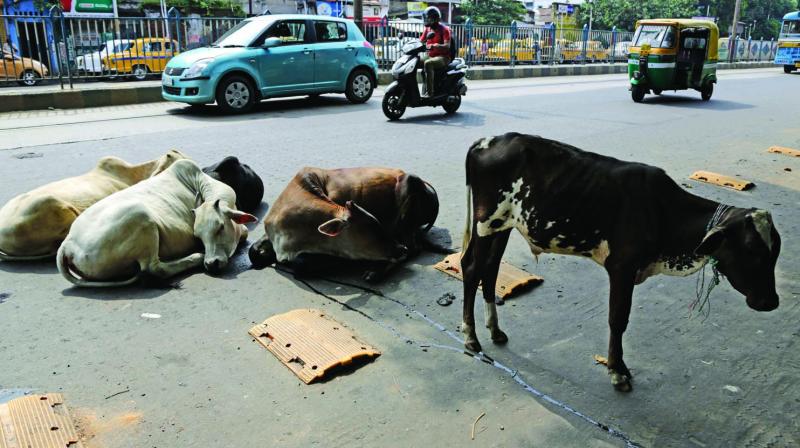 Stray cattle on a road in a city.

Chandigarh: A sit-in of different kind is taking place in Sangrur town of Punjab. People are on sit-in as well as on chain hunger strike to protest against the stray cattle menace. There are seven deaths this month due to cattle menace in Sangrur district. Many people were also injured, some of them seriously. The people from various walks of life have been agitating since August 21 after a spate of deaths in the area.

The dead include a Punjab police home guard jawan and an NRI from Canada. The Punjab home guard jawan was walking though the busy market when a bull tossed him up in the air. He was grievously hurt and admitted to hospital where he succumbed to injuries in a few days. Similarly, a bull hit 40-year-old NRI Nirlep Singh of Malerkotla when he was riding a scooty. He had to return to Canada in a few days but he died in hospital.

People of the district are outraged by the spate of deaths due to cattle menace and administrative apathy.

Ironically, in some states, the government charges cow cess on various services. According to Balwinder Singh Joga, one of the persons leading the agitation, Punjab collects around `1 crore per month from every district of the state in the name of cow cess. “There is `9 cow cess on every cement bag, `10 on sale of every bottle of English liquor and cess on electricity bill. If there is so much money collected in the name of cattle then the administration should help in upkeep of stray cattle.

“Three is 25 acres allotted for the gaushala in Dheneri. The government should make it functional properly by employing permanent employees. There should be some solution to the problem,” he said.

The only gaushala which keeps stray cattle shows that it is full to the capacity with 1,400 animals. However, the inquiry of the place reveals that there are only 850 cattle. The gaushala keeps only the milch cows, the rest are left in towns as well as highways.

According to Parkash Chand, one of those participating in the sit-in, “The cattle menace has become a problem of life and death for common people. On every turn, there is risk of an encounter with a herd of stray cattle or a raging bull. Even after so many tragic incidents, the government has not taken any step to control the menace.”

He says that a couple of years ago when some residents tried to start a private gaushala, they were stopped from doing so by the administration.

Punjab in the past had suffered from stray dog terror as many people, especially children were mauled and killed by stray canines. The problem was so grave that the issue was even raised in the state Assembly. Some of the members came with the idea of sending dogs to the countries where dog meat is liked. Dog terror may have ebbed a bit, but stray cattle menace is a real threat now.