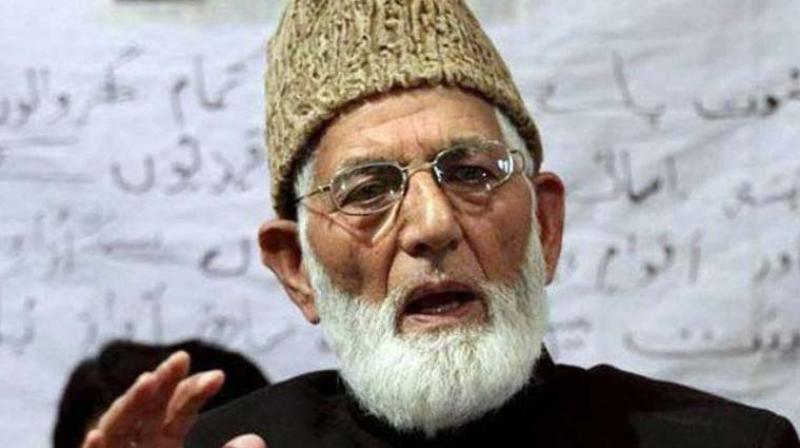 Geelani was born on September 29, 1929 in Zurimanz village outside north-western town of Sopore. (Photo: PTI)

Srinagar: Kashmiri separatist patriarch Syed Ali Shah Geelani passed away after a prolonged illness at his Srinagar residence late Wednesday night. He was 91.

He was buried quietly at a Muslim cemetery located just outside his residence in Srinagar's Hyderpora area between 3.30 and 4 am on Thursday. The funeral was held in haste under tight security in the mazaar adjacent to a mosque and a Sufi shrine, the locals said.

Syed Geelani’s son Dr. Nayeem Geelani claimed that the police “snatched” his father’s body after the family after it sought time till 10 am Thursday “so that our close relatives who had not come to our place yet too could join the namaz-e-janaza and be present at the burial”.

He said that his father had expressed the will that he should be buried at Srinagar’s Idgah Mazaar-e-Shohada (martyrs’ cemetery) but the authorities categorically refused to permit it and said that they wanted him to be laid to rest at the nearby Muslim cemetery “within one hour” and if the family was not willing they could not do it themselves. He alleged that the police authorities then snatched his father’s body and forcibly buried him after pushing and overpowering the family members and even sculling with the women.

His younger brother Dr. Naseem Geelani said, “Nobody from the family was present for his burial. We don’t know who gave him the gussal (last bath), who offered namaz-e-janaza (funeral prayer) for him and who buried him. We saw Abba Jan’s grave only at 10 am and offered fateha”. The police authorities have not reacted to their claims and charges yet.

Syed Geelani's Pakistan-based representative Abdullah Gilani had earlier in a tweet said that he would be laid to rest at Mazaar-e-Shohada at Srinagar’s Idgah grounds.

But the family sources said that Geelani's kin were warned by the authorities against seeking to make his funeral a political manifestation. They were also strictly told that chanting of any political slogans during the funeral would invite legal action.

Earlier, the entire Kashmir Valley was brought under curfew-like restrictions and internet services were also snapped "as a precautionary measure".  Security has been beefed up also in Jammu region particularly Muslim-majority Chenab valley and Pir Panjal region.

The official sources said that curfew-like restrictions may remain in force in the Valley for, at least, three days and that during this period no mourning rallies or similar public gatherings would be allowed in order to maintain peace and in view of the Coronavirus pandemic.

Amid reports of angry crowds taking to streets at a couple of places, the police authorities have warned that "anti-national, anti-social and disruptive elements who will try to seize the opportunity to create disturbances or law and order situations will be dealt with severely under law".

Family sources stated that Geelani, who was suffering from multiple ailments, complained of severe chest pain on Wednesday afternoon, following which he developed serious complications by the evening. They added that he breathed his last at 10.30 pm.

“He had chest congestion and breathing problems and his condition worsened by this evening,” the sources said.

He was under house detention for the past several years, the sources added.

Born on September 29, 1929 in Zurimanz village outside the Valley’s north-western town of Sopore, Geelani headed a faction of separatist Hurriyat Conference alliance till June 2020.

The Hurriyat Conference, formed way back in early 1990s to forge unity among various separatist organizations and “present a cohesive voice before the world,” split in 2002 over a variety of issues, the main being alleged “soft attitude” shown by so-called moderate amalgam leaders towards Peoples’ Conference leader Sajad Gani Lone and “ignoring” his “propensity” towards mainstream camp.

The other faction of the Hurriyat Conference is being headed by Kashmir’s chief Muslim cleric Mirwaiz Umar Farooq since.

A hardcore pro-Pakistan Kashmiri politician and an ardent supporter of "armed struggle for liberation of Kashmir", Geelani was previously a member of Jama'at-e-Islami, the right-wing organization banned by the Union Home Ministry a couple of years ago. He after obtaining a degree in humanities from Oriental College of the Lahore University in pre-Partition era started teaching at a Valley school but his craving for politics drew him close to a well-known National Conference politician Moulana Muhammad Sayeed Masoodi.

Being highly influenced by the politics and teachings of legendary Islamic scholar and Islamist ideologue of his times Syed Abul A'la Maududi, he joined Jama'at-e-Islami, Jammu and Kashmir soon after it was launched in early 1950s.

He was jailed a number of times during his career as a separatist politician. National Investigation Agency (NIA) had named him in a case of money laundering and terror fundings registered by it some time ago.

Geelani wrote over a dozen books including his jail diary 'Rudad-e-Qafs' besides hundreds of papers and articles on varied issues.

He, after quitting the Jamaat in 2003 over its changed stance on "armed struggle” founded  his own Tehrik-e- Hurriyat party. He was replaced by his close confidante Muhammad Ashraf Khan Sehrai as the Tehrik-e-Hurriyat chief in March 2018. Sehrai died in Jammu’s Government Medical College Hospital of Covid-19 on May 5 this year, a day after he was shifted there from a jail of garrison town of Udhampur in critical condition.

Geelani was an MLA from the Sopore constituency of Jammu and Kashmir in 1972, 1977 and in 1987, the last time as a candidate supported by Muslim United Front.

He would, however, publicly vow that he will not settle for anything less than the right to self-determination enshrined in the UN Security Council’s Resolution which stated “The question of the accession of the State of Jammu and Kashmir to India or Pakistan will be decided through the democratic method of a free and impartial plebiscite”.

He had  opposed the Pakistan President General Pervez Musharraf's 'four-point formula' to settle the Kashmir issue, asserting it was a deviation of the neighbouring country's historic stance on Kashmir and hence a "betrayal".