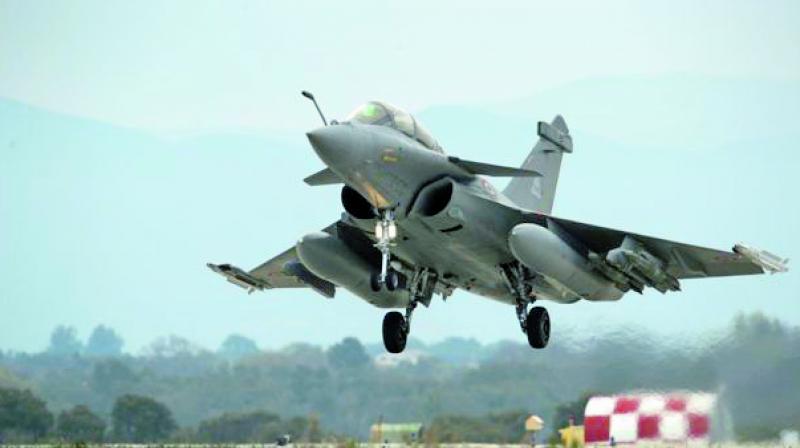 Ambala: The Indian Air Force has initiated major infrastructure upgrade at its frontline base here for deployment of the first squadron of the Rafale jets which will give India greater “potency” over Pakistan as these will be capable of carrying nuclear weapons and other missiles.

The government has already sanctioned Rs 220 crore to set up 14 shelters, hangars and maintenance facilities at the 78- year-old base for the Rafale jets whose delivery is scheduled to begin from September, 2019, a senior IAF official said.

“We are creating infrastructure keeping in mind infrastructure requirement for the Rafale jets for next 40-50 years,” the official said on condition of anonymity as he is not authorised to speak to media.

At present, the base has two squadrons of the Jaguar combat aircraft and one squadron of the MiG-21 Bison.

Marshal of the IAF Arjan Singh, who passed away two weeks ago, was the first commander of the Ambala base in independent India.

Several teams from French defence major Dassault Aviation, the manufacturer of Rafale, have already visited the Ambala air force base and finalised the requirement for the first squadron of combat jets.

The IAF is also carrying out infrastructure upgrade at its Hasimara base in West Bengal which will house the second squadron of the Rafale jets, the official said.

In September last year, India had signed a Euro 7.87 billion (approx Rs 59,000 crore) deal with the Fre-nch government for purchase of 36 Rafale fighter jets. Eighteen Rafale jets will be deployed in Ambala while an equal number of the new generation jet will be stationed in Hasimara.

“We are planning to put in place all required infrastructure for Rafale squadron by end of next year,” said the IAF official. The Ambala as well as Hasimara stations will also have simulator-based training facilities for the air crew of Rafale jets. The IAF has already selected a batch of pilots to fly the jets and they are being given training by Dassault Aviation in France.

The Rafale squadron to be deployed in Ambala will be known as Golden Arrows which was originally based in Bhatinda and was disbanded two years ago.

The features that make the Rafale a strategic weapon in the hands of IAF, which is currently down to 34 squadrons as against a sanctioned strength of 44, includes its Beyond Visual Range (BVR) Meteor air-to-air missile with a range of 150 KM.