India   All India  02 Oct 2018  Singapore and India: A shared vision for a cleaner future
India, All India

Singapore and India: A shared vision for a cleaner future 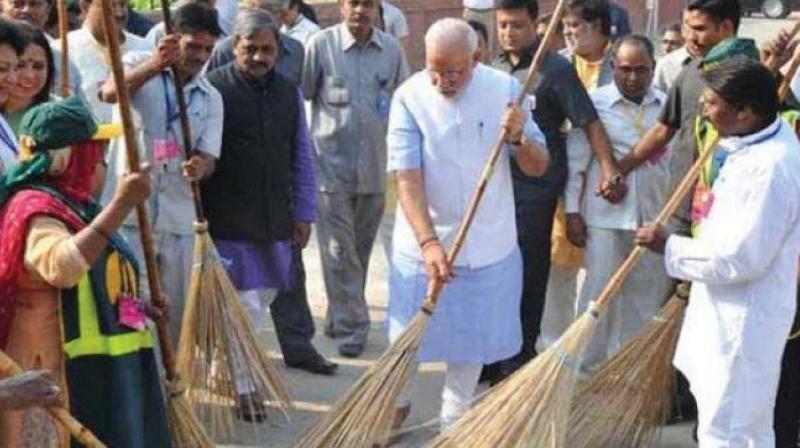 PM Narendra Modi sweeping streets at the launch of the Swachchh Bharat Abhiyan four years ago.

Four years ago, Prime Minister Narendra Modi launched the Swachchh Bharat Mission to achieve the vision of a “Clean India” by 2019. Fittingly, 2 October 2019 is also the 150th birth anniversary of Mahatma Gandhi, who championed sanitation as a national priority. Over the last four years, India has made great progress, building more than 86 million toilets for households, and declaring nearly half a million (470,000) villages free of open defecation.

Singapore has travelled this journey too. Since independence, we have worked hard to create a clean and green living environment for our people. In the early days, many homes were not sewered. “Nightsoil” was collected in buckets, and transported by malodorous trucks to sewerage plants. Often the human waste was dumped into nearby streams and rivers, polluting and poisoning the waters. Unsanitary living conditions created many public health problems, including frequent outbreaks of waterborne diseases.

Our founding fathers resolv-ed to act decisively. They launched a national campaign to “Keep Singapore Clean”. We sewered up every home, cleaned up our rivers, and made Singapore a clean and green city. In particular, we cleaned up the Singapore River.

In the process we had to clear thousands of squatters, backyard industries, pig farms, and countless other sources of pollution in the catchment of the river. Today, a clean Singapore River flows through the city into Marina Reservoir, which feeds into our national water supply. India is a country on a vastly different scale from Singapo-re.

The River Ganga is almost a thousand times longer than the Singapore River. Yet there are some parallels in Singap-ore’s and India’s sanitation journeys.

First, both countries’ experiences demonstrate the importance of vision and leadership. The late Prime Minister Lee Kuan Yew and Prime Minister Modi both made it a priority to keep the country clean and green. They personally led public campaigns to raise awareness and mobilise the masses. Both picked up brooms, and joined the people to clean the streets.

Prime Minister Modi has said that Mr Lee was a “personal inspiration”, and that he had drawn from Mr Lee’s idea that “transformation of a nation begins with a change in the way we are”. Indeed, the Swachchh Bharat Mission is not just a programme to clean India’s environment, but a deeper reform to “transform the way we think, live and work”.

The aim was to prevent rainwater from being contaminated, so that it could be collected and used. At the same time, Singapore recycles used water from sewage treatment plants, purifying it through reverse osmosis, to produce NEWater, an ultra-clean, high-grade water fit for drinking. We took one problem: what to do with used water, and turned it into a solution to another problem: water scarcity.

In India, the nationwide push to implement the Swachchh Bharat Mission with key stakeholders, such as industry and schools, has shown promising results.

The “2018 Unicef Drinking Water, Sanitation and Hygie-ne in Schools: Global Basel-ine Report” highlighted that almost all schools in India have sanitation facilities built, compared to just 50 per cent of schools in 2006. Third, both Singapore and India value international cooperation.

The same solution may not work in a different country, but we can all benefit by lear-ning from others and sharing experiences. I congratulate India on successfully hosting the inaugural Mahatma Gan-dhi International Sanitation Convention, which has broug-ht together leaders, practitio-ners, and experts from around the world to share their sanitation stories.

Singapore too hosts international forums such as the biennial World Cities Summit and Singapore International Water Week. In 2013, to raise awareness of the global sanitation challenge, the UN adopted Singapore’s resolution “Sanitation for All’, to commemorate 19 November as World Toilet Day.

Singapore is happy to share experiences with India as it continues to develop more liveable and sustainable Smart Cities across the country. Singapore has collaborated with India’s Town and Country Planning Organisation to train a hundred officials in urban planning, and water and waste management. Singapore also looks forward to cooperating with states like Andhra Pradesh and Maharashtra to provide urban solutions as they develop their cities.

I wish Prime Minister Modi and the People of India the very best in the Swachchh Bharat Mission to “Clean India”. I also look forward to further cooperation between our two countries to achieve the UN Sustainable Development Goal of clean water and sanitation for our peoples for generations to come.

Lee Hsien Loong is the Prime Minister of Singapore