India   All India  02 Oct 2019  ‘Who else could have created agitation with pinch of salt’: Modi’s ode to Mahatma
India, All India

‘Who else could have created agitation with pinch of salt’: Modi’s ode to Mahatma

PM Modi said Gandhi had the unique ability to become a bridge between some of the greatest contradictions in human society. 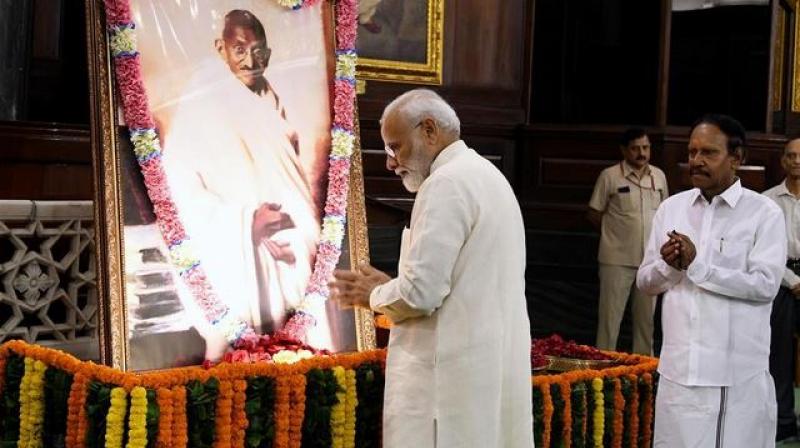 PM Modi said Gandhi offers solutions to every problem. ‘In Gandhi, we have the best teacher to guide us,’ he wrote. (Photo: ANI)

New Delhi:  Prime Minister Narendra Modi wrote an opinion in The New York Times on Gandhi Jayanti and said, “Mahatma Gandhi envisioned Indian nationalism as one that was never narrow or exclusive but one that worked for the service of humanity.”

Quoting Albert Einstein, PM Modi proposed the "Einstein Challenge" to ensure that ideals of the Mahatma are remembered by future generations, reported NDTV.

"As a tribute to Gandhi, I propose what I call the Einstein Challenge... How do we ensure the ideals of Gandhi are remembered by future generations? I invite thinkers, entrepreneurs and tech leaders to be at the forefront of spreading Gandhi's ideas through innovation," PM Modi wrote in the 931-word piece titled "Why India and the World Need Gandhi".

Remembering Mahatma Gandhi’s Dandi March, PM Modi wrote, “Who else could have created a mass agitation through a pinch of salt."

Modi also quoted another one of the world’s most famous leaders who fought against colonialism and racism in his country, Nelson Mandela who referred to Gandhi as the ‘the Sacred Warrior’ said, “His strategy of noncooperation, his assertion that we can be dominated only if we cooperate with our dominators, and his nonviolent resistance inspired anti-colonial and antiracist movements internationally in our century.”

PM Modi, in his article, said Gandhi had the unique ability to become a bridge between some of the greatest contradictions in human society.

"Who else could have created a mass agitation through a pinch of salt," the Prime Minister writes, referring to the Dandi March in 1930.

PM Modi said Gandhi offers solutions to every problem. "In Gandhi, we have the best teacher to guide us," he wrote.

PM Modi also said, “Let us work shoulder to shoulder to make our world prosperous and free from hate, violence and suffering. That is when we will fulfill Mahatma Gandhi’s dream, summed up in his favorite hymn, “Vaishnava Jana To,” which says that a true human is one who feels the pain of others, removes misery and is never arrogant.”

He concluded his piece with a fitting tribute: "The world bows to you, beloved Bapu!" he writes.

Numerous events have been planned in India and abroad to celebrate the 150th birth anniversary of Mahatma Gandhi.

PM Modi, who launched the 'Swachh Bharat' cleanliness campaign in 2014, will declare the country open defecation-free at the Sabarmati Ashram in Gujarat, where Gandhi based himself for many years.