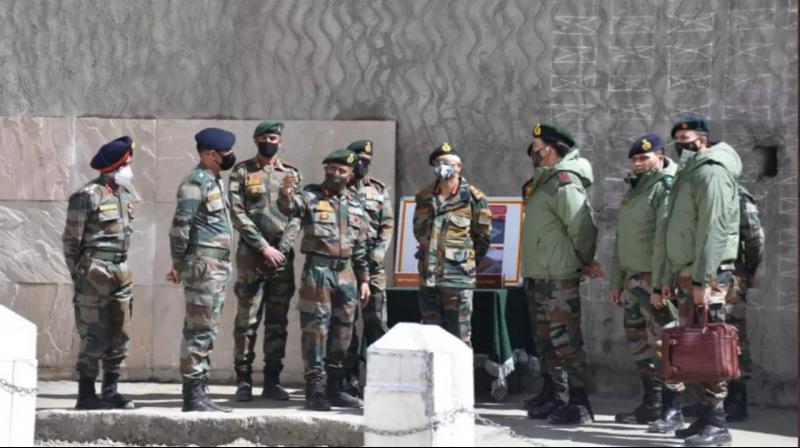 He said in the last one year, there had been huge development in infrastructure by India and it also deployed the latest weapons on its side. (Twitter)

New Delhi: Army chief General M.M. Naravane on Saturday said China had deployed its troops in considerable numbers all across the northern front which remained a matter of concern for India. He was on a two-day visit to the Ladakh sector to review the operational situation as tensions with China continue to remain high.

"The Chinese have deployed troops in considerable numbers all across Eastern Ladakh. Not only in Eastern Ladakh, but all across the northern front, right up to our Eastern Command," the Army chief told a news agency. He said definitely there had been an ‘increase in their deployment in the forward areas which remains a matter of concern for us.’ He said the Chinese had developed infrastructure at its side of the LAC to deploy more troops.

Gen. Naravane said the Indian Army was regularly keeping an eye on Chinese movements. "Based on whatever inputs we get, we are also carrying out matching development both in infrastructure as well in terms of troops that are needed to counter any threat," said the Army chief. He said in the last one year, there had been huge development in infrastructure by India and it also deployed the latest weapons on its side.  Gen. Naravane said the Indian army was quite poised to meet any eventuality.

He said the Indian Army had inducted made-in-India K-9 Vajra howitzers in high altitude locations in Eastern Ladakh. The 13th round of Corps Commander meeting between India and China could take place in the second week of October, he said, adding that he was hopeful that by and by all friction points would get resolved.

Gen Naravane said the situation in Ladakh in the last six months had been normal. "We are confident that as we discuss things with each other, we will be able to reach consensus on how disengagement is to take place. By and by, all the friction points will get resolved," he said. The Army chief said even when the talks had started with China, people were doubtful whether talks would resolve anything, "but I am of the firm opinion that we can resolve our differences with dialogue and that is what has happened in the past few months."

While there has been disengagement between Indian and Chinese troops on the banks of Pangong Tso and Gogra Post, the two armies are still in stand-off in the Hot-Springs area. Moreover, China has shown no interest to further de-escalate the situation in Depsang plains where it is blocking Indian troops from patrolling. China is intruding in new areas along the LAC to put pressure on India.

Some 100 Chinese soldiers reportedly crossed the Line of Actual Control at Barahoti in Uttarakhand on August 30 and returned after a few hours.

On Pakistan, Gen. Naravane said till June end there was no ceasefire violation by Pakistan nor there was any infiltration attempt. But, he said, in the last two months there had been an increase in infiltration attempts by terrorists which could happen only with Pakistan Army's knowledge and local support. He said India had conveyed to Pakistan at local and DGMO level that this would affect the ceasefire agreement between the two countries.

Earlier this year, Indian and Pakistan armies announced that they would observe a ceasefire along the Line of Control and all other sectors from February 24 midnight in a major de-escalatory move.