Odisha villagers hand reptile to forest staff instead of killing it. 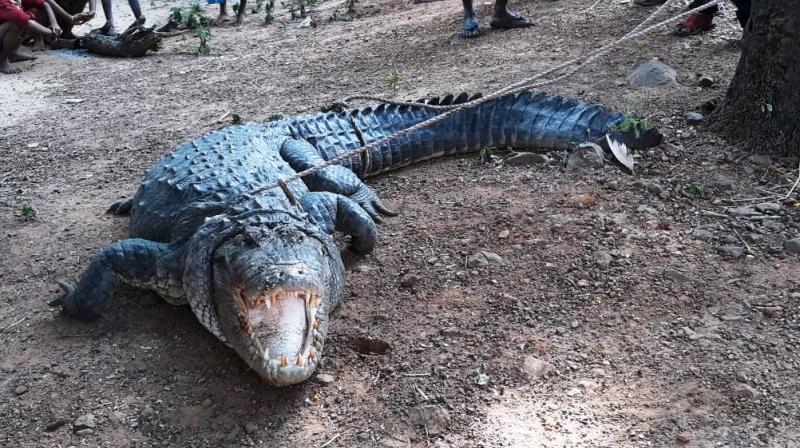 The 10-12-foot-long crocodile tied to a tree by villagers.

Malkangiri: A family of Munata village in Odisha’s Malkangiri district had a narrow escape from the clutch of a giant crocodile on Tuesday night.

According to reports, a 10-12-foot-long crocodile entered into the house of one Dasaratha Madakami of Munata village when the family members, including his two minor daughters, were asleep at around 3 am.

When Dasaratha woke up, he was shocked to find the reptile in his house. Madakami immediately shifted his daughters to the attic of the house and called villagers for help. Later, some locals rushed to the spot and rescued the two girls. They also managed to catch hold of the reptile and tied it to a tree.

After receiving the information, a team of forest officials rushed to the spot to rescue the crocodile. It is suspected that the crocodile might have come out from the nearby Satiguda dam.

On the other hand, the villagers were frightened to see such a huge crocodile for the first time in the village.

“I heard about the incident at around 4 am. The villagers managed to catch hold of the reptile and attempted to kill it. But I resisted and asked them to inform the forest officials,” said a villager.

Bhaskar Behera, a social worker, said people of Malkangiri were strangers to the crocodile as the rivers through district are very rocky and shallow and hence unsuitable for the reptile. People are now wondering where from the crocodile came and since when.

“Our is a hilly area and the rivers do not offer ideal living conditions for such reptiles. People are wondering from where the reptile came. Forest officials must conduct a study on it,” said Mr Behera.