A group of assailants with sophisticated weapons opened indiscriminate fire upon some people in Kheroni in Assam's Tinsukia before fleeing. 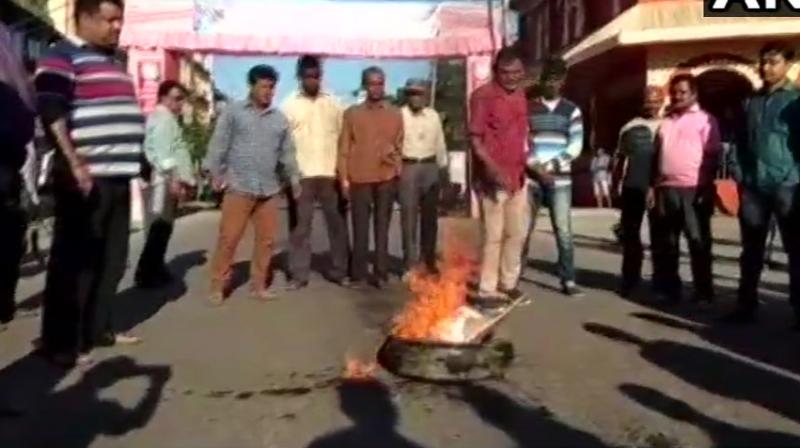 All Assam Bengali Youth Students Federation has called a 12-hour shutdown in Tinsukia in protest against the murder of 5 people killed by ULFA terrorists in Bishnoimukh village. (Photo: Twitter | ANI)

Guwahati: Three members of a family were among five people shot dead by suspected ULFA (Independent) gunmen while two others were injured at Kheroni in Assam's Tinsukia district on Thursday night, police said.

According to reports, terrorists belonged to United Liberation Front of Asom (ULFA) Independent -- a banned militant outfit. However, ULFA (Independent) denied any role in the attack.

Publicity Department member of the ULFA(I) Romel Asom in a statement e-mailed to PTI said, "The ULFA (I) would like to make it clear to all concerned authorities that our organisation does not have any involvement in the firing incident last night."

The Assam Police on Friday launched a massive combing operation to nab those involved in the killing.

A group of assailants with sophisticated weapons came to this village near Dhola-Sadiya bridge and called out five-six people from their house around 8 pm, they said. They then opened indiscriminate fire upon those people before fleeing under the cover of darkness, a police officer said.

Police suspect the gunmen belonged to the ULFA (Independent) faction as they were in battle fatigue.

Director General of Police Kuladhar Saikia and Additional DGP Mukesh had rushed to Tinsukia to review the law and order situation. A massive combing operation was launched to nab the accused, police said.

All the possible hideouts were being combed and senior officials were directed by Chief Minister Sarbananda Sonowal to remain alert. A bandh, called by the All Assam Bengali Federation, was also being observed Friday in the district protesting against the attack. Vehicles were off the roads and shops were closed. No untoward incident was reported till 9 am, police said

Condemning "the killing of innocent people", CM Sonowal had said, "Strong action will be taken against the perpetrators of this dastardly violence. We will not tolerate such cowardly act."

We will take strongest action against the perpetrators of this heinous crime. I have directed all law enforcing agencies to maintain peace and take stern action against anybody trying to destabilise our peaceful society and state.

According to Tinsukia Superintendent of Police Mukdhajyoti Mahanta, the bodies were taken to the Sadia Civil Hospital for postmortem.

Meanwhile, Union Home Minister Rajnath Singh spoke to Sonowal and took stock of the situation. Singh expressed deep anguish over the incident, saying strongest possible action will be taken against the perpetrators of the heinous crime.

Deeply anguished by civilian casualties in an attack in Upper Assam region. It is a reprehensible act of mindless violence. Spoke to Assam CM Shri @sarbanandsonwal regarding the incident and asked him to take strict possible action against the perpetrators of this heinous crime.

Political parties and organisations across the state condemned the killing and demanded that the culprits be immediately nabbed.