India   All India  02 Nov 2018  The making of the Oxford English Dictionary
India, All India

The making of the Oxford English Dictionary

Another new word is the adjective “bongga,” which means extravagant, flamboyant, impressive, stylish or excellent. 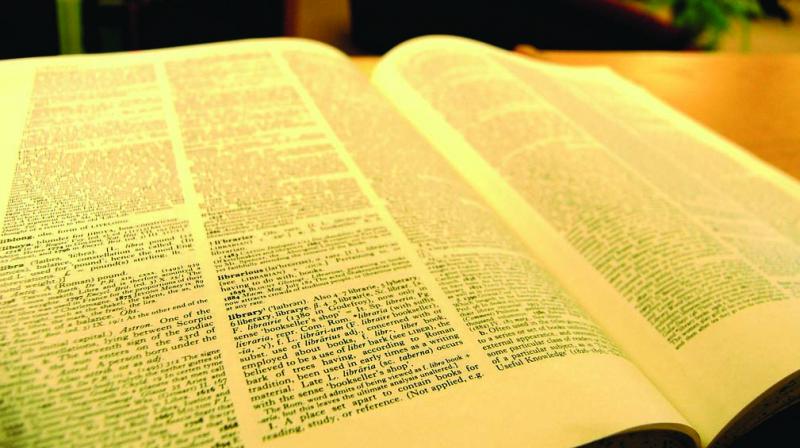 In its latest update to the Oxford English Dictionary, the Oxford University Press has added 1,400 new words. Among them is “idiocracy” —  a government formed of people considered ignorant or idiotic. Idiocracy was itself first attested in 1967 but owes its current prominence to the title of the satirical film in 2006, Idiocracy, which depicts a dystopian future in which the human race has become extremely ignorant, stupid and anti-intellectual. The update has also added the word “trapo,” which describes a politician who is perceived by people as belonging to a conventional and corrupt ruling class. Trapo is an abbreviation of the English phrase “traditional politician”  with a pun. Another new word is the adjective “bongga,” which means extravagant, flamboyant, impressive, stylish or excellent. The update also sees the addition of “bedunged”  —  being soiled with or covered in dung. This word was first recorded in the 15th  century but has persisted in modern use because of its widespread prevalence.

The Oxford English Dictionary undergoes revisions and updates four times in a year, showing the global currency of  a language that adds new words every year from all over the world. The last  print edition of the OED was its second edition in 1989. The year coincided with a state visit to England by the then Indian President R. Venkataraman. In fact, Queen Elizabeth II greeted the Indian head of state at Buckingham Palace by stating that his visit coincided with the release of the second edition of the OED that had now the single largest collection of words of Indian origin in English. The Queen, once the sole repository of the language the bore her name the “Queen's English” now attested that English had truly become global in nature and Indian English was a firm and integral part of the language. The OED will perhaps never see a print edition again. In 1989, the second edition of the OED had 20 volumes and even this proved inadequate. There were four massive print supplements added to it over the years and now the print volumes of the second edition of the OED have become a collector's item.

How did it all begin? Many who had visualized the first edition of the OED in 1857 (then known as the New English Dictionary) had no idea what they had begun or even that the work would continue in the present. That it would be the greatest project ever undertaken in the English language was anticipated and as described by Simon Winchester in his fascinating book The Meaning of Everything — the Story of the Oxford English Dictionary. It was at  an early meeting of the Philological Society that an exhaustive critique of some deficiencies in the existing dictionaries was presented in 1857 thereby signaling the need  for a new dictionary.  As Winchester notes, the new dictionary would make “a fresh start, from a tabula rasa, from which would be constructed a wholly new dictionary, that would give in essence and in fact, the meaning of everything.”

The first editors of the new dictionary project were Herbert Coleridge (the grandson of the poet Samuel Taylor Coleridge)  and Frederick Furnivall, both philologists with impressive academic qualifications. Both did admirable pioneering work on the dictionary, but Coleridge kept indifferent health and died at the early age of 31. He was succeeded by Furnivall who numbered John Ruskin, Lord Tennyson, Charles Kingsley and the banker-writer Kenneth Grahame among his friends. In appreciation of Furnivall's efforts to encourage him to write, Grahame modeled the character of the Water Rat after him in The Wind in the Willows. But Furnivall lacked self-discipline and a sense of organization. At a meeting of the Philological Society in 1871, Furnivall announced his intention of finding a successor. It would take him another four years to find such a man and the man was James Augustus Henry Murray.

It was a chance remark by Murray to Furnivall after a meeting of the Philological Society that got him the job. Learning of the difficulties in finding a new editor, Murray remarked, “I rather wish I could have a go at it” half in jest. But Furnivall seized on it and felt he had his man at last.

Murray was no more than an amateur philologist, a former bank clerk now a schoolteacher. He was 38 years old and spent his leisure hours musing on the origins of dialect. Neither his background nor his future looked promising. But he had a brooding intellectual look and a fiery red beard that lent him “a magisterial air of righteous authority”.  He pursued languages as a hobby and in his application for the post of Assistant Keeper of Printed Books at the British Museum, he said “I have an intimate acquaintance with Italian, French, Catalan, Spanish, Latin and to a lesser degree, Portuguese, Vaudois, Provencal and other dialects. I know Dutch, German, French, Flemish and Danish. I have a useful knowledge of Russian and I know Persian and Sanskrit for the purposes of comparative philology. I have a sufficient knowledge of Hebrew and Syriac to read at sight the Old Testament and to a lesser degree I know Aramac, Arabic, Coptic and Phoenecian.” Needless to say, Murray did not get the job!

It would take Murray and his assistant editors Henry Bradley, Charles Onions and William Craigie 54 years to complete the first edition of the famous dictionary. The project was negotiated with three publishers, John Murray, Macmillan and Cambridge University Press before finally finding acceptance with OUP.  It began to be known as the Oxford English Dictionary (OED). The project was initially to be completed in 10 years and the dictionary was to be around 7,000 pages at an estimated cost of £9,000. In the 54 years since the project was started , the OED grew to 16,000 pages and the cost of the project was £300,000. It was estimated to be 10 volumes but in print form it became 12 volumes. Among the more famous names who worked in the dictionary was J.R.R.Tolkein who worked as an assistant under Bradley. The author of The Lord of the Rings was happy to see his invented word “hobbit” as an entry in the OED. Murray had a legion of assistants and members of the public to help him with words for the  dictionary.

This was in response to the Murray Appeal, a four page printed document to “the English speaking and English-reading public in England, America and the British colonies to read books and make extracts of words for the new dictionary”. A major response to the Appeal and one of the prolific contributors to the OED was an American surgeon and civil war veteran, Dr W.C. Minor.

Minor was a convicted murderer and was serving a life-term in a harsh prison for the clinically insane. Sadly, Murray did not live to see the completion of the dictionary. He was nearing 80 in 1914 and hoped to complete the grand Victorian conjunction —his 80th birthday, his golden wedding anniversary and the completion of the OED. But it was not to be. Murray died of cancer in 1915 when they were working on the letter “T” in the dictionary. The OED was finally completed by Craigie and Onions in 1928 (Bradley having died in 1923) a full 71 years after the project was first proposed.  On June 6, 1928, the then British Prime Minister Sir Stanley Baldwin released the 12 volumes of the OED in front of a glittering gathering. “The editors and staff of the OED have given us of their best. There can be no worldly recompense , except that every man and woman in this country and throughout the English-speaking world whose gratitude and respect is worth having, will rise up and call you blessed for this great work. The
Oxford English Dictionary is the greatest enterprise of its kind in history.”