The pitch came at a time when pollution made the air so toxic in New Delhi that officials were forced to declare a public health emergency. 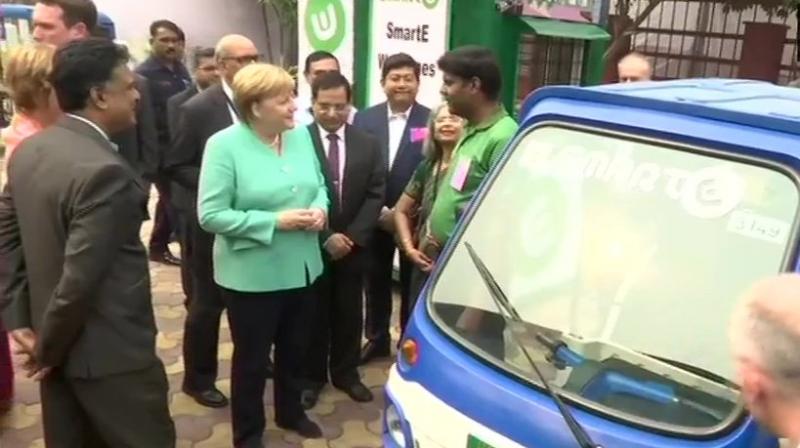 New Delhi: German Chancellor Angela Merkel, on a three-day visit to India, on Saturday made a pitch for speeding up several environment friendly projects such as introduction of electric buses to replace diesel-based public transport in urban centres. The pitch came at a time when pollution made the air so toxic in New Delhi that officials were forced to declare a public health emergency.

Merkel pledged to spend one billion euros--about Rs 8,000 crore at current exchange rate—in the next five years on green urban mobility in India, as part of German-Indian partnership projects.

"We will also earmark 200 million euros to reform bus sector in Tamil Nadu. Whoever has looked at pollution in Delhi yesterday would find very good arguments to replacing diesel buses with electric buses," Merkel was quoted as saying by news agency ANI at a business meeting in Delhi.

Pictures of Merkel’s welcome at the Rashtrapati Bhavan showed the visible effects of smog. The National Capital Region (NCR) experienced its most polluted day in nearly two years on Friday when the average Air Quality Index touched 484 around 4 pm. The air quality, however, improved minimally on Saturday morning and came out of the ‘emergency’ zone, but pollution levels are still in the ‘severe’ category.

Meanwhile, the German Chancellor also spoke about cooperation between India and Germany in other sectors too including health and agriculture.

"We want to cooperate more closely in the health, agriculture and Artificial Intelligence sector. We can cooperate more in the agricultural sector. Something needs to be done as agriculture is an important sector in India, Water scarcity is another problem in India and we can work together towards these issues," she added.

Merkel further said that she has already discussed openly the barriers that the German companies face here to invest in the business.

"We wish to contribute to urbanisation and smart cities. We have good technology in water and waste management," she said.

Merkel asserted that German investments need some new regulations and a new momentum as regards to India to EU for trade purposes.

"We are close to a conclusion on no. of issues like access to public procurement and public tendering processes. We also intend to give a boost to multilateralism trade system. We would like to strengthen the coalition on multilateralism. India is economically strong. We also have a common interest in developing Afghanistan," said Merkel.

"We know that India will celebrate 75 years of independence in 2022. In the meantime, we will be able to identify more areas of cooperation. You have a very young population," she added.