There was no official word on whether Kashmir or Ms Merkel’s comments were discussed during the restricted talks with Mr Modi. 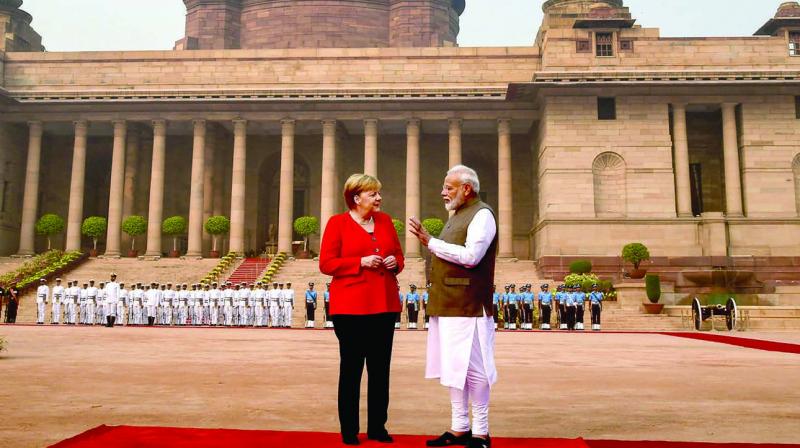 New Delhi: In a remark that has completely overshadowed her visit to India and come as a huge embarrassment to the government, visiting German Chancellor Angela Merkel said on Friday that the situation in Kashmir was “not sustainable and not good” and that “this has to change for sure”.

The remark is sure to have shocked the Indian government, though there was no immediate, official reaction.

Speaking with the German media accompanying her on the visit to India, Ms Merkel was quoted by a Reuters report as saying, “The situation for the people there is currently not sustainable and must improve.” The report also quoted Ms Merkel as saying that she would raise the matter with Prime Minister Narendra Modi later on Friday evening, and that while she was aware of India’s position regarding Kashmir, she wanted to hear Mr Modi’s plans for restoring normalcy in the region. The remarks were made ahead of restricted talks with Mr Modi and after she had co-chaired the Indo-German Fifth Biennial Inter Governmental Consult-ations (IGC) with the Prime Minister. Sources said that the Kashmir issue did not figure during IGC meet on Friday morning.

There was no official word on whether Kashmir or Ms Merkel’s comments were discussed during the restricted talks with Mr Modi.

Friday was the 89th day since India revoked Article 370 and announced the bifurcation of the state of Jammu and Kashmir into two Union Territories that came into being on Thursday. Restrictions on movement and communication in several parts of J&K remain, as does the deployment of troops in civilian areas. Many Kashmiri Opposition leaders remain in detention or under house arrest.

Several heads of states and foreign leaders have criticised India for the communications clampdown in J&K. New Delhi, however, has maintained that the restrictions would be lifted in due course and remain in force to prevent violence and maintain peace.

Despite Ms Merkel’s statement, government sources expressed confidence that the long-standing German position, that Kashmir is a bilateral issue which has to be discussed between India and Pakistan, remains unchanged and that the German Chancellor may well have had to comment on Kashmir keeping in view her home constituency and the European position on human rights.

“Germany has been supporting India on the Kashmir issue on international fora,” sources pointed out.

But, ironically, Ms Merkel’s remarks came after more than 20 mostly rightwing European Union MPs — who visited Kashmir recently on a “private visit” that was “facilitated” by the Indian government — backed India on the Kashmir issue and menace of cross-border terrorism.

Earlier in the day, in a veiled message to Pakistan without naming it, PM Modi and Ms Merkel on Friday “underlined the need for all countries to ensure that their territory is not used to launch terrorist attacks on other countries in any manner”.

In the presence of the German Chancellor, PM Modi said the two countries would “intensify bilateral and multilateral cooperation to deal with threats like terrorism and extremism”.

Praising Ms Merkel, PM Modi said, “Not only in Germany and Europe, Chancellor Merkel is counted among the leading leaders of long standing service in the world. I am proud and happy that she is a friend of India and mine. As Chancellor for the last nearly one and a half decades, she has contributed significantly in deepening Indo-German relations. I thank her for this. Today we had the 5th meeting of the Inter-Governmental Consultations... We have laid special emphasis on increasing cooperation in areas like new and advanced technology, artificial intelligence, skills, education, cyber security. We have decided to develop new possibilities of cooperation in e-mobility, fuel cell technology, smart cities, inland water ways, coastal management, cleaning of rivers and environmental protection. Our cooperation in these areas will also help in joint efforts against climate change. We are encouraging the private sector to further accelerate our increasing participation in trade and investment… We invite Germany to
take advantage of opportunities in defence production in the defence corridors in Uttar Pradesh and Tamil Nadu.”

PM Modi added, “Independent India will be 75 years old in 2022. We have set a target of building a new India by then. For India’s priorities and requirements in this multi-dimensional effort capabilities of technological and economic power houses like Germany will be very useful.”

Interestingly, even as northern India especially Delhi has been reeling under the effects of pollution, the two countries decided to strengthen cooperation on green technologies and solutions. “Both sides agreed to foster cooperation on low-carbon mobility solutions and welcomed the signing of the new Joint Declaration of Intent on the Indo-German Partnership on Green Urban Mobility wherein the German side expressed its readiness to provide additional concessional finance of Euros 1 billion to support improvements of green urban mobility,” a joint statement released after their meeting said.

Apart from the standard bilateral emphasis “that terrorism is a global scourge” and calling “upon all countries to work towards rooting out terrorist safe havens and infrastructure, disrupting terrorist networks and financing channels and halting cross border movement of terrorists”, the two nations — both claimants to permanent membership of the UN Security Council and part of the G-4 grouping — reiterated their cooperation for UNSC reform. Both countries also reiterated their full support for each other’s candidatures for a permanent seat in a reformed and expanded UN Security Council.

“Both leaders expressed their satisfaction with the plans for a German House at 2 Nyaya Marg, New Delhi, to accommodate the German Embassy School as well as the offices of state-funded institutions operating for the purposes of the Embassy’s commercial, economic, cultural and scientific department,” the joint statement said.