She said Jayalalithaa was a great political personality and the said life story cannot be filmed without adding her life as part of the film. 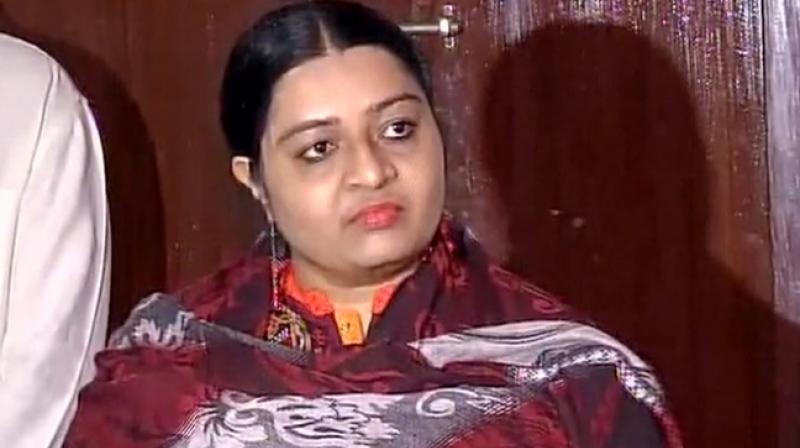 Chennai: J. Deepa, niece of former chief minister late J.Jayalalithaa, has filed a suit in the Madras high court to restrain producers A.L.Vijay, Vishnu Vardhan Induri and Gowtham Vasudev Menon from producing a film in on the life of  Jayalalithaa and/or her family members and their direct descendants allegedly without her consent.

The suit filed by Deepa is likely to come up for hearing next week. In her suit, Ms Deepa submitted that she is a legal heir and direct descendant of late J. Jayalalithaa. Jayalalithaa is her aunt (sister of her father). She had very close acquaintance with her during her life time.

“Jayalalithaa was a well known public personality and had acquired an iconic reputation among the people of Tamil Nadu as well as across India. She had established a great name for the party AIADMK, founded by former chief minister M.G. Ramachandran. She had a huge number of followers and her fame is written in golden letters in the history of Tamil Nadu,” she said.

She said A.L.Vijay and Vishnu Vardhan Induri have announced to produce a film on the biography of her late aunt and announced the same through public media. She said that she has learnt that actress Kangana Ranaut has been identified to for the role of Jayalalithaa and the film has been titled as Thalaivi in Tamil and Jaya in Hindi. “They planned to release the said film on the life story of Jayalalithaa as a bilingual film for their commercial and monetary benefits without her consent,” she alleged.

Meanwhile, filmmaker Gowtham Vasudev Menon has announced to make web serial on the life story of Jayalalithaa and actress Ramya Krishnan is likelyto perform the role of Jayalalithaa.

He has planned to produce the web serial on the life story of Jayalalithaa for his commercial and monetary benefits without her consent, she added.

She said Jayalalithaa was a great political personality and the said life story cannot be filmed without adding her life as part of the film. In such an event, the same would amount to an interference of her privacy. More so, she was not aware of the story, script, screen play and dialogue, prepared by them in producing the said movie and for the web serial. She fears that they may portray Jayalalithaa and her personal life in the life story and her (Deepa) part in the life story may also be depicted by them in their own version which may affect the family privacy and her privacy. Therefore, with a view to safeguard the interest of the personality right of Jayalalithaa, applicant’s privacy and their family privacy, it was absolutely necessary that without her consent and approval of the story, screen play, script etc., they should not be permitted to proceed with the production of the said film or web serial and releasing the same for public exhibition, she added.