She slammed Rahul Gandhi's statement questioning PM's knowledge of Hinduism saying Cong is diverting attention as they don't have an agenda. 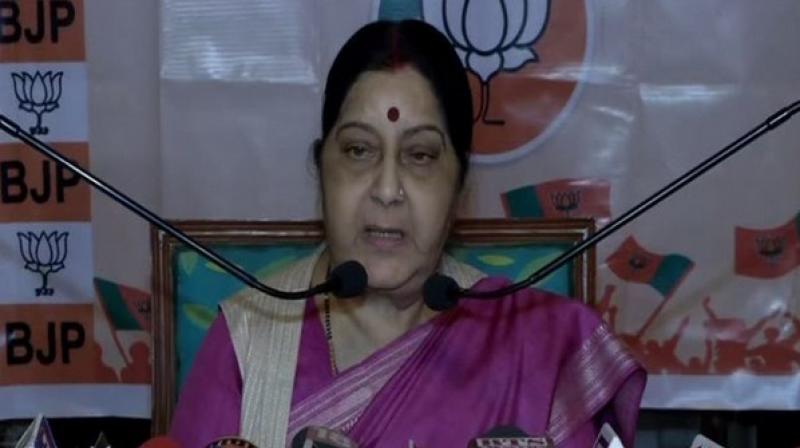 'This is a fight between three captains. One is a cricket captain (Pakistan Prime Minister Imran Khan), one is a military captain (Captain Amarinder Singh) and another one is a Congress captain (Rahul Gandhi). I don't want to comment more on this,' she said. (Photo: ANI)

Swaraj while addressing a press conference here on Sunday said: "This is a fight between three captains. One is a cricket captain (Pakistan Prime Minister Imran Khan), one is a military captain (Captain Amarinder Singh) and another one is a Congress captain (Rahul Gandhi). I don't want to comment more on this."

Lashing out at Rahul for questioning Prime Minister Narendra Modi's knowledge about Hinduism, the senior Bharatiya Janata Party (BJP) leader dismissed the Congress leader's claims saying that the party is diverting people's attention since they don't have an agenda in the elections.

Chiding the previous Ashok Gehlot government for not opening suitable Passport Seva Kendras (PSKs), Swaraj said that under the Vasundhara Raje administration, 17 such offices were built thus benefitting the people of the state.

"Previously, there were only three PSKs, in Jaipur, Jodhpur and Sikar. After we came to power, 17 PSKs were opened. One of them is in Bikaner now, where anyone can get a passport without worrying to travel a lot. I also announced earlier that by March 2019, a PSK centre would be built and opened in every Lok Sabha constituency," Swaraj said.

Focusing on the achievements of the External Affairs ministry in the last four-and-half years, Swaraj underlined that the ministry has taken proactive steps to connect with the Indian diaspora over the world and rescued them from conflicts.

"2.30 lakh Indians have been rescued in the last four-and-half years. Out of that, six people from Bikaner were stuck in Kailash Mansarovar Yatra. In the Yemen conflict and in Kuwait, many people from this city were stranded. A tweet came, after which we sprung into action and got them back (to India)," she added.

Swaraj reiterated that she would not retire from politics and would not contest the next year's general elections due to health issues. She added that on the advice of her doctors to avoid dusty areas, following her kidney transplant surgery in 2016, she took the decision of not contesting the polls.

Talking about the H1B visa issue, wherein the Donald Trump administration is proposing to give visa to most-skilled and highest-paid foreign workers, the External Affairs Minister said, "The issue was raised by me and the Prime Minister at all international platforms. When their foreign minister (Michael Pompeo) came here (to India), I had said that India believes a non-discriminatory approach from the US on H1B visa. Prime Minister Modi and US President Trump share good relations and I am sure that he (Trump) will not take a step that will undermine India's interests."

Swaraj once again seconded that New Delhi is open to talks with Islamabad, but the same can happen only in a terror-free and stable atmosphere.

She underlined that India and China are solving their border disputes amicably and the same has not affected the ties between the two countries.

The minister informed that Chinese Foreign Minister Wang Yi is expected to pay a visit to India on December 31 to hold talks with the Indian leadership.

Reiterating the reason for the hike in fuel prices in India, Swaraj said that the hike was the result of increasing fuel prices at international level.