The Bhim Army is attracting youths in large army and this is what is disturbing the BSP leadership. 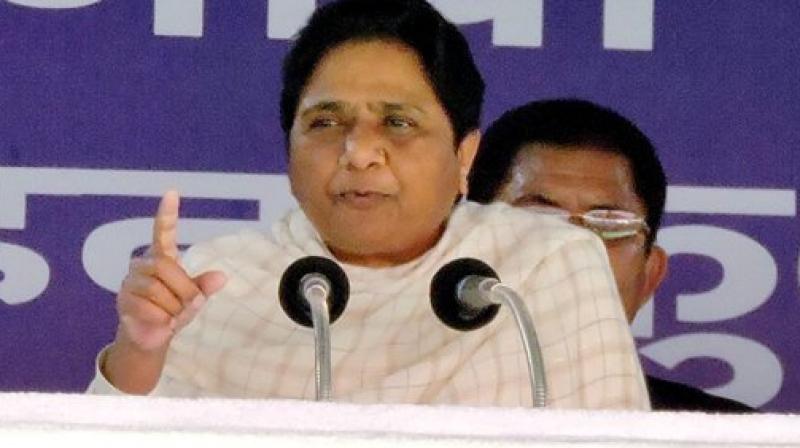 Lucknow: Bahujan Samaj Party  (BSP) president Mayawati has asked her party cadres to increase interaction with members of the Dalit community and counter the growing influence of the Bhim Army, particularly in western UP.

Perturbed by the popularity of the Bhim Army and other fringe outfits, Ms Mayawati has directed party cadres to create awareness about the motives of such outfits “which is to divide the Dalit votes and create an advantageous position for the BJP”.

Incidentally, the Bhim Army chief Chandra Shekhar, in a shrewd move, refers to Ms Mayawati as his ‘bua’ and recently said that his aim was to see her as Prime Minister.

Ms Mayawati, on the other hand, has repeatedly referred to the Bhim Army as a ‘BJP stooge ‘ and has been asking her party workers to beware of the outfit.

“Chandra Shekhar wants to project himself as an extension of BSP and is trying to confuse votes by praising ‘Behenji’ (Mayawati). If he is so committed to the Bahujan movement, he should join the BSP and work under the leadership of Behenji. We are now making our people aware of his designs though a state wide campaign,” said a BSP functionary.

The Bhim Army has launched a massive membership drive across UP, Uttarakhand, Bihar, Haryana and Punjab and has also asked Dalits to donate generously for the party fund.

The Bhim Army is attracting youths in large army and this is what is disturbing the BSP leadership.

Apart from the Bhim Army, a number of outfits with similar names have emerged in the past few months such as the Bahujan Azad Party, Rashtriya Bahujan Morcha, Ambedkar Army, Dalit Army, Bahujan Samajik Parivartan Manch and Dalit Yuva Dal, among others. Bahujan Samaj Dal and Bahujan Vichar Manch among others.

According to BSP sources, Ms Mayawati will devote her full time to Uttar Pradesh and will review the party’s position in each district.

Ms Mayawati is aware o the fact that she draws maximum strength form UP and though she may have drawn a blank on the 2014 Lok Sabha elections, her party ranked second in 34 out of 80 seats.

The BSP is the only party after the BJP that has a strong support base across the five regions of Uttar Pradesh – Rohilkhand, Avadh, Purvanchal, western UP and Bundelkhand—and Ms Mayawati is now trying to consolidate her position here before the next general elections.