Dr Priyanka Reddy’s family locked politicians, police and media out of their colony in Shamshabad on Sunday, spurning their VIP condolences. 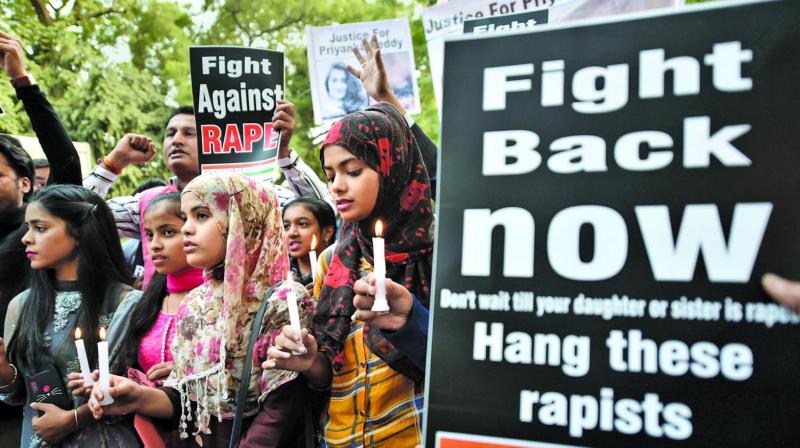 Girls, along with activists, take part in a candlelight protest over the Hyderabad rape and murder case in New Delhi. (Photo: PTI)

Hyderabad: Road Transport Authority (RTA) officials had a chance to impound the lorry used by the killers of Dr P. Priyanka Reddy. They did not. Had they done so, she might have woken to a new week this morning. Prime accused Mohd Ali alias Mohd Arif was stopped by the Mahbubnagar RTA while carrying a load of iron bricks from Gangavathi in Karnataka to Hyderabad on November 24. Arif did not have his driver’s licence and so the lorry was seized. Arif contacted the lorry owner, Srinivas Reddy, who advised the driver to avoid the impounding by immobilising the vehicle. Accordingly, Arif removed a motor cable from the lorry.

With the lorry unable to start, the RTA left it and went away. Arif then restarted the lorry and took it to a petrol pump at Bhootpur road in Mahbubnagar, where he parked.

Then, Arif phoned Chennakeshavulu (another accused) who biked over and they had food. A bit later, Naveen (also an accused) and Arif proceeded on bike while Chennakeshavulu drove the lorry to Thondapally village. At about 9 pm, they parked on the side of the road, and slept in the lorry cabin.

The next morning, the police told them to move the lorry, so they drove and reached the Thondapally toll plaza on the service road near the Gachibowli outer ring road. Shiva, the fourth accused, confessed that Chennakesavulu, Naveen and he sold some iron scrap to a scrap dealer near the Raikal toll plaza for about Rs 4,000, and with that they bought whiskey etc at around 5:30 pm on November 27.

They were drunk when they saw Dr Priyanka Reddy at around 6 pm. That’s when they hatched their plan to rape and kill her. None of which would have happened if the RTA had impounded the lorry.

Meanwhile, Dr Priyanka Reddy’s family locked politicians, police and media out of their colony in Shamshabad on Sunday, spurning their VIP condolences.

They were assisted by their colony’s fellow residents, as everyone felt vexed with the attempts of VIPs to derive mileage from their tragedy. They put up a placard that read “No entry for media, politicians and police”. The family locked its house from the outside.

Dr Priyanka Reddy’s parents said they did not want sympathy but justice; they wanted understanding of their agony and trauma. The family stuck to its stand that timely police action could have saved their daughter.

Speaking for the first time on the brutal gangrape and murder, Telangan chief minister K. Chandrasekhar Rao on Sunday decided to set up a fast-track court to deal with the case.

Responding three days after the incident, Mr Rao described it as ghastly and expressed his deep anguish. He said he was upset that the “perpetrators of such heinous crimes are living amidst us.” He called Dr Priyanka Reddy’s murder a “gruesome and an inhuman act.”

In a related development, Telangana information technology minister K.T. Rama Rao urged Prime Minister Narendra Modi to amend the laws and make capital punishment applicable to those convicted of crimes against women and remove the option to review the death sentence.

In a series of posts on Twitter, the TRS working president said the time had come to amend the “archaic laws that let perpetrators of violence against children and women go scot free.”