The Japanese official also said China was a topic of discussion at the Indo-Japan Dialogue. 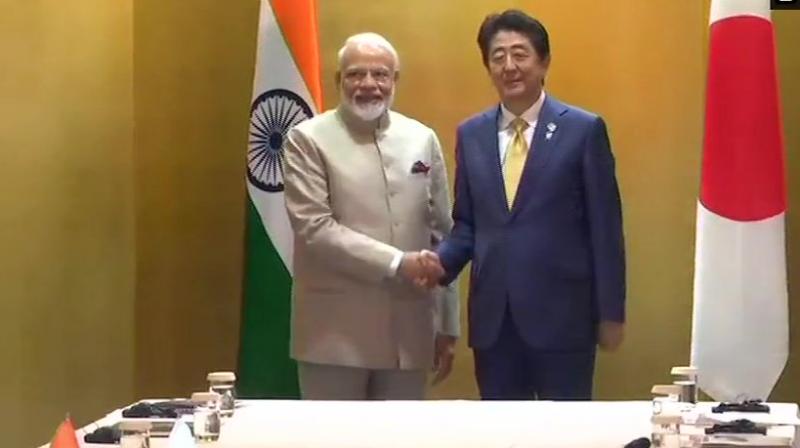 Saturday’s dialogue came just about a couple of weeks ahead of the crucial annual summit expected to be held in India in mid-December between Japanese PM Shinzo Abe and Prime Minister Narendra Modi. (Photo: Twitter/ ANI)

New Delhi: The subject of China came up in a major way at the inaugural India-Japan 2+2 Dialogue that took place in New Delhi at the foreign and defence ministers’ level on Saturday, and both agreed that it was important to “encourage” Beijing to follow international rules, Japan foreign ministry deputy press secretary Atsushi Kaifu told reporters here on Sunday. In response to a question, Mr Kaifu also said his country was looking at the situation in Kashmir “carefully”, and hoped for a “peaceful resolution” of the issue through dialogue.

Asked whether Japan would extend financial aid to projects in India’s northeastern state of Arunachal Pradesh — which China claims as its own — the Japanese official said his country was continuing to discuss the issue “very carefully” in view of the “current status of that area”. However, he added that Japan was interested in development projects in the Northeast as a whole. Asked about the Japanese-aided high-speed rail project — popularly known as the bullet train — to connect Mumbai and Ahmedabad, in view of comments from certain quarters in the new ruling alliance in Maharashtra questioning the need for the project, the Japanese official said he was “not aware of local developments” there,  but expressed confidence that officials of the two countries would “continue to work closely to overcome challenges”.

The 2+2 Dialogue was conducted on Saturday from the Japanese side by foreign minister Toshimitsu Motegi and defence minister Taro Kono, while external affairs minister S. Jaishankar and defence minister Rajnath Singh led the Indian side. Saturday’s dialogue came just about a couple of weeks ahead of the crucial annual summit expected to be held in India in mid-December between Japanese PM Shinzo Abe and Prime Minister Narendra Modi. Despite the speculation about Assam’s capital Guwahati being the venue, Mr Kaifu said: “We are still working on the timing. When and where (exact dates and venue), we cannot say.”

Asked about whether Kashmir figured in the 2+2 Dialogue, Mr Kaifu said: “I don’t remember the ministers going through detailed discussions on the Kashmir issue, but at the same time I can say we (Japan) looked at the situation very carefully. We are also aware of longstanding differences of views on Kashmir. So we hope a peaceful resolution through dialogue will be done.” The comment comes a day after an Indo-Japanese joint statement, issued after the dialogue, asked Pakistan to take action on terrorist networks operating from there. It also shows that major world powers, including Japan, are continuing to monitor the situation in the Kashmir Valley.

The Japanese official also said China was a topic of discussion at the Indo-Japan Dialogue. He also said ties between China and Japan are now “back on normal track”. The reference was to the festering maritime territorial disputes between the two East Asian countries, and although ties have improved between them, the concerns still remain. “We don’t compromise on principled issues like maritime issues and security issues, including the South China Sea and East China Sea,” Mr Kaifu said. “If China follows and acts as per international rules, there will be more opportunities for both sides (China and Japan). So it is important for us to reach out to China, to keep engaging it and encouraging it (to follow international rules),” he added. “We have a lot of challenges in the direct neighbourhood,” he pointed out, in a veiled reference to the disputes between the two countries.

With an eye on China, both India and Japan had on Saturday “reaffirmed the importance of freedom of navigation and overflight, unimpeded lawful commerce and peaceful resolution of disputes” in the South China Sea. India also has concerns on Chinese military assertiveness in the region, including its posture on the South China Sea, the movement of Chinese submarines in the Indan Ocean Region and also the Line of Actual Control , the de facto land border that separates India and China.

On Japanese assistance for infrastructure projects in Arunachal Pradesh, which China claims as its own, Mr Kaifu said: “Japan and India are very much interested in ... connectivity inside of India ... but because of the current status in that area, we are continuing to discuss on these issues very carefully,  but when it comes to connectivity, the northeastern part of your country is also one of the targets (of development).”