Dates of India-Japan Summit will be finalised 'very soon': MEA

Kumar had said last month that both sides decided to 'defer' Abe's visit for the December 15-17 summit to a mutually convenient date. 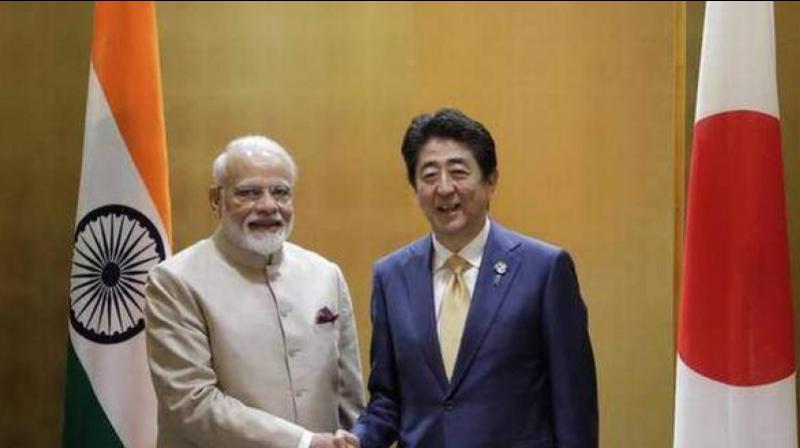 Japanese Prime Minister Shinzo Abe's visit to this country for the annual summit with his Indian counterpart Narendra Modi in Guwahati on December 13 was postponed in the wake of the violent protests in the northeastern states. (Photo: Twitter)

New Delhi: India and Japan are in touch through diplomatic channels and "very soon" the dates of the annual bilateral summit, postponed last month in the wake of violent protests over the amended citizenship law, will be finalised.

Japanese Prime Minister Shinzo Abe's visit to this country for the annual summit with his Indian counterpart Narendra Modi in Guwahati on December 13 was postponed in the wake of the violent protests in the northeastern states.

"We are in touch with the Japanese side through diplomatic channels. We do hope that very soon we will come to the finalisation of the date," Ministry of External Affairs Spokesperson Raveesh Kumar said at a media briefing.

Asked whether two summits will be held this year, he said, "It is an annual mechanism, the summit which was supposed to be held in December that is the one which is getting postponed. But all these matters which will be under discussion with the Japanese side."

Kumar had said last month that both sides decided to "defer" Abe's visit for the December 15-17 summit to a mutually convenient date.

The cancellation of the Japanese prime minister's trip came a day after Bangladeshi Foreign Minister A K Abdul Momen and Home Minister Asaduzzaman Khan called off their visits to India in view of the situation arising out of the enactment of the amended Citizenship Act.

Guwahati had seen violent protests over the newly amended law, which provides for granting citizenship to non-Muslim persecuted minorities from Bangladesh, Pakistan and Afghanistan.

Diplomatic sources had said the Japanese government clearly conveyed to New Delhi that it would not be possible for Abe to travel to Guwahati in view of large-scale protests in the northeastern region.

Asked about Indo-China boundary negotiations last month and talk of early harvest to the boundary question, Kumar said there was this feeling that the boundary issue should be addressed from a strategic perspective of Indo- China relations.

"It was also decided that while the discussions go on under the Special Representative talks framework, there should be peace and tranquillity along the border which is very important for the overall development of the bilateral relationship," Kumar said.

"We also highlighted that a proper discussion on the boundary is important for the overall development of our bilateral relationship," he said.

Noting that these were sensitive negotiations, the MEA spokesperson said one issue should not cloud the overall relationship.

India and China last month agreed to intensify efforts to achieve a "fair", "reasonable" and mutually acceptable solution to the vexed boundary issue, resolving that its early settlement will serve the fundamental interests of both countries.

There was a consensus during "constructive" border talks here between Chinese Foreign Minister Wang Yi and National Security Adviser Ajit Doval that both sides should respect each other's sensitivities and concerns in order to build mutual trust, according to the MEA.