Nod for vaccines amid scare over new strains of Covid-19 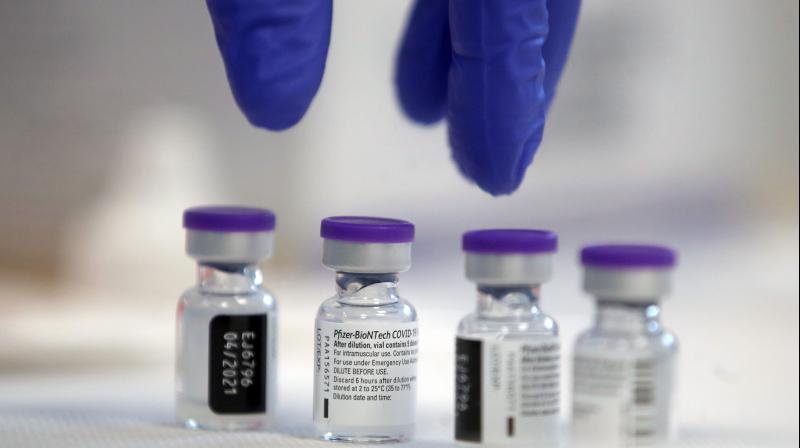 Bharat Biotech has submitted data from Phase 1 and 2 trials to the CDSCO and the Drugs Controller General of India (Representational Image: AFP)

Hyderabad: Covaxin of Bharat Biotech was on Saturday recommended for approval for restricted use’ in ‘emergency situations’ in public interest with different mutant strains are emerging in SARS-CoV-2, the virus that causes Covid-19.

On Friday, Covishield, the Oxford-AstraZeneca vaccine manufactured by the Serum Institute of India was recommended for emergency use authorisation (EUA).

Bharat Biotech has submitted data from Phase 1 and 2 trials to the CDSCO and the Drugs Controller General of India. But only 23,000 volunteers were enrolled in the Phase 3 human trials against the requirement of 26,000 volunteers. These trials are going on and data will be assessed later.

A senior pharmacologist in Hyderabad said, “The recommendation is based on conditions that it will be used only for a section of the people. Regulators want to be careful as only limited data is available with them. Hence the roll-out of Covaxin will be in the mode of a larger clinical trial.”

It implies that the subjects who get Covaxin will be monitored and their details assessed from time to time. The term ‘abundant precaution’ means that the regulatory authorities will want details from the company and also a proper follow-up on their volunteers.

Dr A. Sanjay Reddy, senior pharmacologist and member of the Telangana State Pharmacy Council, said, “While considering the Bharat Biotech's application, the SEC had noted that the ongoing clinical trial is a large one including subjects with co-morbid conditions, which have demonstrated safety till date but the efficacy is yet to be demonstrated.”

The question of efficacy comes in as it is important whether the vaccine will prevent people from getting Covid-19. In comparison to Bharat Biotech, the Serum Institute of India has been granted restricted emergency use of its vaccine with multiple regulatory conditions of submission of data and fortnightly evaluations.

Bharat Biotech said in a statement that product development and clinical trials have generated five publications, and four of them have been accepted by international peer-reviewed journals. The publication of Phase 2 trial data is in the process of peer review.

The company stated that Covaxin has been evaluated in approximately 1,000 subjects in Phase 1 and 2 clinical trials promising safety and immunogenicity results with acceptance in international peer-reviewed journals.

Senior government officials in Telangana state said the roll-out of two vaccines, Covishield and Covaxin, meant both will be used simultaneously in the first phase of vaccination of healthcare workers. According to a health official, the use of Covaxin will be in the co-morbid age-group.

A health official said, “The system of vaccination is clear that those in the Covisheild group will get two doses of the vaccine. Those in the Covaxin group will be given that. There are two doses to be administered and the schedules have been prepared accordingly.”