Violent mobs went on the rampage in the Nagaland capital vandalising and setting on fire government offices and vehicles. 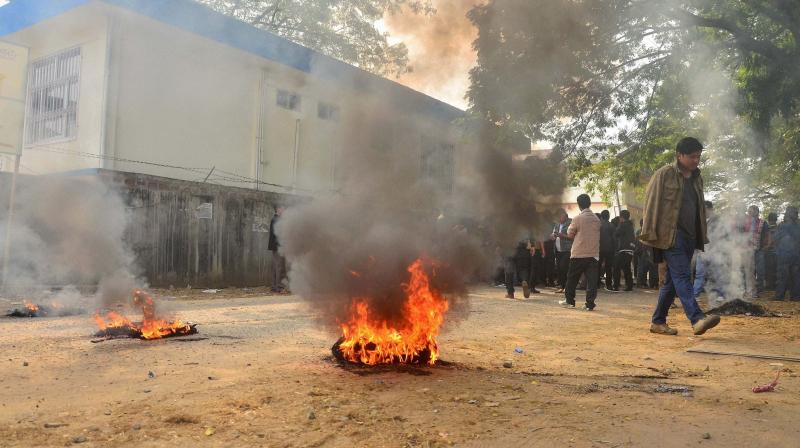 Protesters burn tyres on the road during a bandh called by Joint Coordination Committee against 33 per cent women reservation for the forthcoming Municipal and Urban Local Body election in Dimapur. (Photo: PTI)

Yesterday, violent mobs went on the rampage in the Nagaland capital vandalising and setting on fire government offices and vehicles, prompting deployment of five columns of army to bring the situation under control.

"I have talked to the Director General, Assam Rifles and told him that the Nagaland Chief Minister and his residence have to be saved," Union Minister of State for Home Kiren Rijiju said.

He also appealed agitating people to shun violence. "We understand the sentiments of the people, but this is no way that you attack the cabinet and vandalise government (institutions)," the Minister said on the sidelines of a function here.

He asked people to understand the attempts made by "some forces" who are trying to provide tool to the agitation.

Rijiju said central forces have already been deployed there to ensure safety of people.

The Nagaland government has been facing stiff opposition from tribal bodies over introduction of 33 per cent reservation for women in the urban local bodies.

The urban local bodies elections have been due in the state for over 16 years.

The Zeliang government decided to hold the polls following an interim Supreme Court order in a case filed by the Naga Mothers' Association for a directive to the state government to implement 33 per cent reservation for women in the ULBs, like in many other states.

Apparently under pressure from the protesters, the state government yesterday declared the elections process null and void there.

Anger was brewing in the state since the killing of two protesting youths in police firing at Dimapur on Tuesday. "We are sad for all those who have been killed in police firing. We appeal to the people there to follow the due process and ensure proper last rites for the dead bodies," Rijiju said.

He said that the Centre would provide any support sought from it by the Zeliang government. "If the state government seeks any other support, we are ready to provide it. Nagaland is a sensitive state and it is important to ensure law and order there at any cost," the Minister said.

The Regional Transport office and that of the Excise Department were also set ablaze by violent mobs demanding the resignation of the Chief Minister Zeliang and his entire cabinet for going ahead with the ULB polls despite opposition from powerful tribal groups that are against 33 per cent reservation for women in the municipal bodies.