SP spokesperson Rajendra Chaudhary criticised Shukla saying that being a public servant, he cannot take such a pledge at a public function. 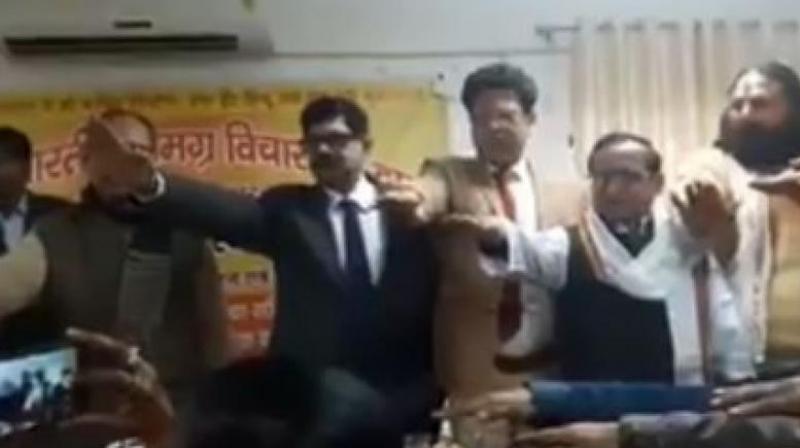 Lucknow: Even before the dust could settle over Bareilly district magistrate R Vikkram Singh’s Facebook posts, another senior officer has now embarrassed the Yogi Adityanath government.

This time it is DG Home Guard Surya Kumar Shukla who was seen in a video clip pledging to build the Ram temple in Ayodhya.

A 1982 batch IPS officer, Shukla is seen in the video clip raising slogans of ‘Jai Shree Ram’ at an event with other unidentified leaders.

The video shows the pledge being administered by Azam Khan of the Muslim Karsevak Manch. The IPS officer pledging to construct the Ram temple is a serious matter since the temple issue is still under the consideration of the Supreme Court and Shukla is a serving officer in the UP government.

"We, Ram bhakts, in this programme, pledge that a grand Ram temple will be built soonest. Jai Sri Ram," say the men at the function.

Reacting to the video, IPS Association said in a tweet that they have disassociated themselves from the act of the officer and asserted that it was against the ethos of neutrality, fairness and uprightness that the Indian Police Service stands for.

We disassociate ourselves from the act of a senior #IPS officer as shown in the video & reiterate that it is against the ethos of neutrality, fairness and uprightness that Indian Police Service stands for. pic.twitter.com/PoAxmlFBfL

Samajwadi Party spokesperson Rajendra Chaudhary also criticised Shukla saying that being a public servant, he cannot take such a pledge at a public function.

Shukla, meanwhile, clarified, “It was a function organised by the Muslim community to build consensus on the Ayodhya issue and I participated. The video has been tampered. What I said there was in conformity with the Supreme Court directive which favours out of court settlement”.

Meanwhile, deputy Chief Minister, Keshav Maurya, defended the officer and said that even an officer has the right to be a Ram bhakt.