Modi said the development of Micro, Small and Medium Enterprises (MSME) was a priority for his Government. 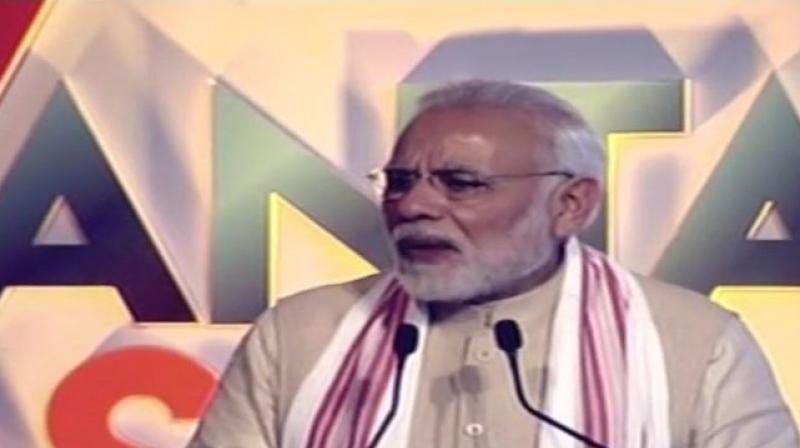 Guwahati: India's growth story will get speed only when there is allround development of Northeast and its people, said Prime Minister Narendra Modi at the inaugural session of Advantage Assam-Global Investors Summit’18 in Guwahati.

Terming the tagline of the summit as an appropriate one, Modi said ‘Advantage Assam: India’s Expressway to ASEAN’ was not just a statement but also a comprehensive vision.

He also said the Northeast was at the heart of 'Act East Policy' created by the Government.

The Prime Minister lauded Assam for being ranked first among the North Eastern States in the Ease of Doing Business report.

"With the present leadership of the state government, Assam is going to further improve its current position to emerge as one of the most sought after states for investment," he said.

Speaking on Ayushman Bharat, the health insurance scheme announced in the Union Budget, Modi said the scheme is expected to benefit 45-50 cr people. It has enhanced possibilities of setting up hospitals in tier 2, 3 cities, he added.

Modi said the development of Micro, Small and Medium Enterprises (MSME) was a priority for his Government.

"In this year’s budget we are giving big relief to MSMEs by reducing rate of income tax to 25 per cent on companies reporting a turnover of up to Rs. 250 crore," he said.

He said the Government has alloted an amount of Rs 1300 crore for restructuring the ‘National Bamboo mission’ which will benefit people of North East, especially the farmers of the region.

Presenting the Union Budget in the Parliament on February 1, Finance Minister Arun Jaitley claimed that the MSMEs are an engine of growth and employment. He announced Rs 3,794 crore to MSMEs for credit support, innovation and capital interest subsidy.