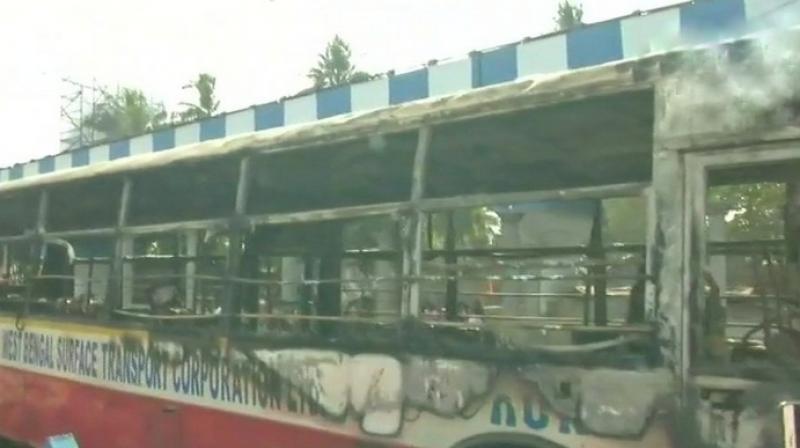 Kolkata: Two college students mowed down by a bus reportedly jumped signal at Chingrighata crossing on the Eastern Metropolitan Bypass (EM Bypass), an arterial road of Kolkata, on Saturday.

The two victims, who died on the spot, are boys from the locality adjacent to the bypass.

Soon after the incident, clashes erupted between locals and police in the area.

Agitated mob started pelting stones on cars and at the police that had rushed to the spot.

The police allegedly resorted to a lathicharge to control the situation and that enraged the crowd.

The stone throwing intensified and when fire engines tried to reach the spot to put out the flames, those were pelted with stones too.

According to reports, the two dead youth Biswajit Bhuiyan and Sanjay Banik, were first year college students who were apparently crossing the road to go to a shop to buy some sweets.

The local Trinamool Congress MLA, Sujit Bose, rushed to the spot but that did not help calm the anger of the agitated mob.

“The locals want a subway to cross the busy road. I have spoken to the locals to understand their problems. The government will try to help the families of the two students who died,” Hindustan Times quoted Bose as saying.

Bose added that "It was an unfortunate accident but I urge people to remain calm."

Locals complained that the accident on Saturday took place due to lack of vigil by the traffic police near the site.

Traffic has come to a halt for at least two hours on the EM Bypass that connects extreme south Kolkata to the airport via Salt Lake, Rajarhat and Newtown and the IT hub of the city.

Locals also ransacked private cars and taxis. Their anger was also directed at the police. People have been forced to get off stranded transport and walk to their destinations.