The small hillock on Tiddim Road, near Imphal, with its reddish soil, represents the farthest the invading Japanese and INA forces could approach. 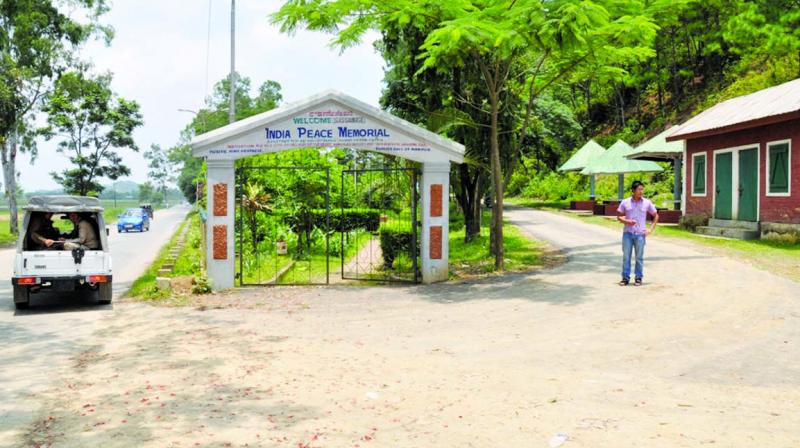 Bhubaneswar: The India Peace Memorial at Lokpaching near Imphal is considered a lace of pilgrimage for patriotic Indians and Japanese. The three crude unpolished red sandstone blocks brought over from Rajasthan, lying in the center of the ceremonial yard represent the blood of Indo-Japanese, who laid down their lives in the battle of Imphal in 1944.

The complex is full of Cherry Blossoms, the most favoured flowering tree of Japan, which were brought over by war veterans and planted there.

Few know that this memorial has an Odisha connection. It was due to efforts of an eminent Odia personality, Chintamani Panigrahi, that the memorial came up while he served as Manipur's governor between 1989 and 1993. The memorial was his tribute to Netaji, who was born and brought up in Odisha and completed his education in Cuttack.

The peace memorial was constructed with the the efforts of Japanese war veteran Lt. General Iwaichi Fujiwara. The General is acknowledged as the mentor of Netaji's Indian National Army.

According to historian and researcher Anil Dhir, the Battle of Red Hill was fought from May 20-29 in 1944. The small hillock on the Tiddim Road, 16 km away from Imphal, with its reddish soil, represents the farthest the invading Japanese and INA forces could approach into India. It was the last major battle fought by Netaji's Army — Indian National Army — on the Indian soil against the colonial British power.

"On April 14, 1944, the INA and the Japanese Army had reached Trongloubi and captured the British camp. The INA Tricolour, with the springing tiger depicted on it, was hoisted at Moirang Kangla by Colonel Malik," said the historian.

From Moirang, the INA advanced towards Imphal, making the Allies retreat all the way. The Battle of Red Hill unfortunately proved a disaster for the advancing Indo-Japanese forces as the British brought in huge reinforcements and halted the INA advance. Nearly 200 Japanese soldiers died, the INA, too, suffered huge causalities. The Red Hill was strewn with the battle-dead. Most were buried hurriedly by the retreating Japanese. Even years later, bones were regularly uncovered after rains washed off the top soil, claimed the Odia historian.

"In 1974, General Fujiwara led a delegation of surviving war-heroes to Manipur and visited the spot. He suggested that a memorial be built at Red Hill.

In December 1982, the Indo-Burma War Area Veterans Association of Japan, which had a nationwide strength of 75,000 veterans, took up the cause and made another representation to the Government of India requesting for allocation of a plot measuring 5,000 square metres  in Imphal, said the historian.

Gen. Fujiwara died before he could see his dream memorial enshrined. Other Japanese war heroes like Major U. Honda and Takashi Suzuki, a onetime Japanese Ambassador to India, formed a pressure-group called the Imphal Committee and came to India. When Narashimha Rao visited Japan in June 1992, his Japanese counterpart took up the matter with him and Mr Rao assured the veterans that the land would be allotted. On his return from Japan, Mr Rao followed up the matter and contacted Mr Panigrahi, the then governor of Manipur coordinated with chief minister R.K. Dorendra Singh to allot  land for the memorial. Mr Panigrahi's term as governor was about to finish when he took up the matter. It was because of his  efforts that the project saw the light of the day.