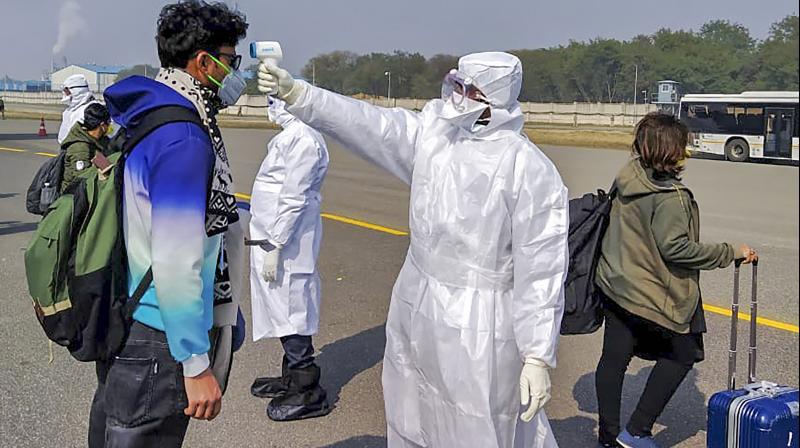 Medics screen Indians after they were brought home by an Air India aircraft from China’s coronavirus-hit city of Wuhan, at the airport in New Delhi. PTI photo

The condition of two medical students from Wuhan University, who tested positive for the novel coronavirus, has improved, according to doctors. The two students who were admitted into the isolation wards of the government medical colleges at Thrissur and Alappuzha are said to be recuperating.

They are being closely monitored for now. The relatives and friends of the Thrissur student who are under observation are not symptomatic though they will remain under home quarantine until the incubation period is over.

The total number of persons under observation in Kerala is 1999 including 75 admitted in isolation wards of various hospitals.

In Alappuzha, eight persons have been quarantined in hospitals including the virus infected medical student while 124 persons are under home quarantine. Health authorities have initiated measures to trace all persons in the contact list of the student.

Isolation wards have been set up at Alappuzha medical college where 20 persons can be treated at a time and in general hospital where 25 people can be treated. A corona surveillance committee has been set up in Alappuzha to coordinate prevention and control measures.

Meanwhile, the National Institute of Virology has received the permission to test samples to confirm coronavirus. The NIV Alappuzha will start testing samples from today which will help in quicker analysis and detection of the positive cases, said health minister K.K Shylaja. Facilities have been stepped up at NIV, Alappuzha with more staff and machines and the unit is now equipped to test as many as 200 samples per day. There was considerable delay in getting the results from NIV, Pune as all states are sending out blood samples to the centre for analysis.

The police have arrested two more persons for spreading fake news on coronavirus through social media. The police earlier caught three persons for forwarding misleading and baseless information pertaining to the virus.