The sound of Azaan rang out in the middle of Modi's speech on the BJP's triumph in Tripura and the PM stayed silent for around two minutes. 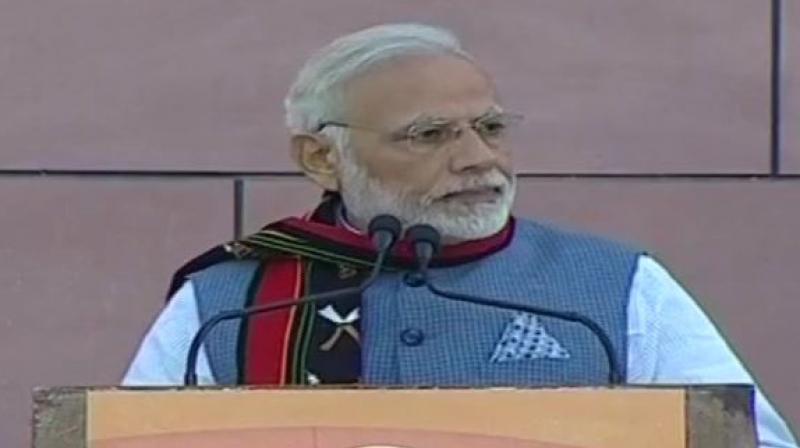 When the prayers stopped, Prime Minister Narendra Modi resumed his speech after chanting 'Bharat Mata Ki Jai', which was echoed by scores of BJP workers gathered at the party's headquarters. (Photo: Twitter | ANI)

New Delhi: Prime Minister Narendra Modi, who was at BJP's new headquarters in Delhi, to address the gathering after the victory in elections in Northeast, on Saturday paused his speech for Azaan (prayers) from a mosque near the headquarters.

The sound of Azaan rang out in the middle of Modi's speech on the BJP's triumph in Tripura and the Prime Minister stayed silent for around two minutes.

Prime Minister Narendra Modi has started his speech after BJP president Amit Shah addressed the cheering crowd and soon after Modi started his speech by chanting "Bhart Mata ki Jai", the prayers from the mosque the vicinity began.

When the prayers stopped, Modi resumed his speech after chanting "Bharat Mata Ki Jai" in a thunderous tone, which was echoed by scores of BJP workers gathered at the party's headquarters.

Azaan is the Muslim call to worship and it is called out by clerics at mosques five times a day. Though it is usually held in the morning, the Maghrib Azaan is performed in the evening.

Saturday was not the first time when the Prime Minister had stopped his speech for Azaan.

During his campaign for the Gujarat Assembly elections in November 2017, the Prime Minister paused his speech for Azaan.

Also in 2016, while addressing a rally in West Bengal, Narendra Modi had stopped his address and resumed after Azaan was over saying, "I do not want to interrupt anyone's prayers. So I decided to take a brief rest."

Later in his speech on Saturday, Prime Minister Narendra Modi called for a moment's silence for BJP workers he said had been killed in Tripura, Kerala and other states. "Many workers of the BJP have sacrificed their lives. For their political ideologies, many innocent volunteers have been killed. Fear and misconceptions - these weapons have been used by Left parties with Maoist views," said the Prime Minister.