India   All India  03 Mar 2020  A child prodigy who must successfully move into adulthood
India, All India

A child prodigy who must successfully move into adulthood

“Prodigy” derives from the Latin “prodigium”, a monster that violates the natural order. 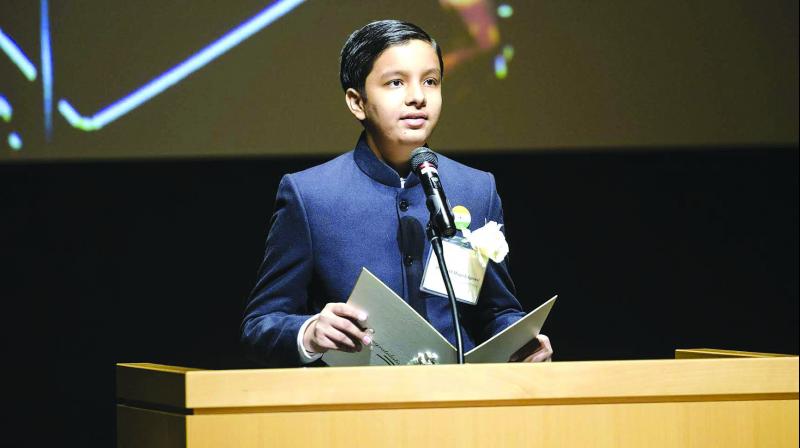 Child prodigies have been with us since early times. But over the epochs, many of them have had their genius questioned — mostly as to whether or not a parent or a mentor was behind their amazing skills. It is only when their talents were authentically established that people around them could acknowledge them as teenage wonders. Nagpur’s Shreenabh Agrawal is one such amazing kid who proved the sceptics wrong and kept consistently displaying his precocious genius after he unfurled it at several acclaimed forums.

In a world in which early bloomers are rare and hence revered, there’s no underestimating the wizardry of the human brain. But despite our fascination with these pint-sized or nano geniuses, who just might blossom into future Albert Einsteins, there is paucity of research into them — and almost no consensus on their inner chemistry, or even an exact definition for them. The most consensual elucidation of these “genetic freaks” is a child, typically under the age of 10, who has mastered the use of a complex and challenging skill at an advanced adult level. A child can also be labelled a prodigy for being ahead (and more dedicated) in a particular skill or having higher-level understanding than his or her peers. Some of them may be hothouse products of a regime of accelerated learning but they may also have rare cognitive abilities.

“Prodigy” derives from the Latin “prodigium”, a monster that violates the natural order. Being parents of Shreenabh, mother Tinu and father Moujesh represent people whose children are beyond their own comprehension. Shreenabh’s mother sniffed her son’s potential when she noticed Shreenabh’s stunning memory and creativity at age three. She found he could memorise lengthy scriptural passages and paint like an artiste. “As a child prodigy, he seemed to have emerged fully formed at birth, his talent already developed, his gifts fully ripe,” recalls Tinu, who has obsessively coached him all along and shown enormous patience and discipline in her desire to nurture and foster Shreenabh’s natural abilities. It began with the toddler smearing paints and dripping splatters around; but the set of nimble fingers soon started turning out pictures with the proficiency of an artiste.

The pair began noticing changes in the vibrant child and started understanding his special needs. They bought him books, because he announced he would prefer them to toys. He seemed to have a natural affinity for painting and figures. Later, in class V, he showed his flair for figures. He cleared the Gauss Contest conducted by the Association of Mathematics Teachers of India .The test is aimed to discover and encourage students who have the capacity for original and creative thinking, readiness to attack unfamiliar and non-routine problems exhibiting a general mathematical ability appropriate to their level. The parents found Shreenabh at ease solving abstract problems and demonstrating a high level of logic and reasoning.

There is a general belief that prodigies, no matter how gifted, usually lack the requisite emotional spectrum to navigate the daily realities. Tinu has consulted with lot of experts on idealised models of child rearing and “parenting principles” for such children and felt consoled that he’s on the right track. She knows she can’t restructure a genome. True to a genius’ stereotype, Shreenabh was not endowed with robust physical health, but displayed several uncanny traits and a remarkable aptitude for logical thought building and at his young age, may not be fully formed, but they are sensually grounded and spiritually transcendent and free of incongruities. Shreenabh’s mind is like a sponge with a high capacity for soaking knowledge. Shreenabh always jumped ahead of his peers. He has been a star student and a high achiever at his school, Chanda Devi Saraf School, and secured all India rank 3rd, scoring 99.2 per cent in the ICSE Examination.

As Shreenabh kept shooting far ahead of other children his own age, and doubled up as a teacher for his peers, his mother wondered if they ought to try to hold him back a little. “I didn’t quite understand where we were heading with him during those early years. Shreenabh is now a happy, well-adjusted child who loves to laugh and enjoy life. I no longer worry about his social life, since he has plenty of friends. He’s a lover of books but not a bookworm. He can forget books and studies and enjoy himself when he needs it. Despite his devotion to study, he finds time to play chess and indulge in the arts.”

The list of Shreenabh’s accomplishments makes truly astonishing reading: Google Scholar for scholastic publications; first prize in the 2018 International Essay Competition organised by the government of Japan in collaboration with several multilateral institutions; First Prize winner in the 2018 Pendle War Poetry Competition, London in the Under-18 Overseas category; part of a contingent of World Peace Leaders for a live interview conducted by Radio Chico Schweiz Switzerland for the fifth “World Peace Week”, September 2019; winner of the “Himalayan-2016” title in the scientific talent search examination — Vidyarthi Vigyan Manthan (VVM) held at IIT Delhi; appointment as the first international freelance youth reporter for Radio Chico Switzerland; Letter of Commendation from the IVL Swedish Environmental Research Institute for outstanding performance in the Case Solving Challenge, Letter of Commendation for being the youngest fellow in the MBL Monsoon Laddership Circle 2019 organised by Service Space organisation, California. Shreenabh has been selected in Team India for the International Science and Engineering Fair (ISEF) being held at California in May 2020. 1,500 students from around 70 countries compete in the fair.

Shreenabh has published two books, 150 articles, five research papers, and has one patent “Triple Lock Bore Hole Protection Lid” to his credit. He loves applying STEM (science, technology, engineering and maths) in creative ways to solve social problems. The loss of life on account of children falling into bore wells sensitised his young heart. He also presented a research paper titled “Mahila e-Haat: A Gender based e-Commerce Initiative”, has been selected for the “2019 IIM — NASMEI Summer Marketing Information Systems Conference” at IIM Indore. His project got an A grade and a citation at the National Children’s Science Congress 2019.

What happens to child prodigies when they leave their gold star-studded youth behind and enter adulthood? As a wonder boy, Shreenabh sparked public interest and media glare quite early. It’s fair to say that the parents have helped turn their son into a mini-celebrity, making him available for scores of interviews and news conferences. The inflation of Shreenabh’s talents is not unusual. People seem to have a natural tendency to glorify exceptional children and ascribe incredible behaviours to them on account of their nebulous perceptions. But that sensationalism can contribute to a prodigy’s perception that the world regards it as an ornamental attraction, leading to feelings of isolation and a malformed sense of self-worth and self-determination. But Shreenabh’s parents have been careful to dispel these myths. “He is simply a normal little boy with a high capacity for learning”, they proclaim.

Shreenabh has an unusual air of maturity. At school, he works towards the collective success of his class. “I’m generally pretty shy, hesitant to show my work,” he admits. This reticence poses a challenge for those who need to explore Shreenabh’s diverse repertoire of talents and the vast knowledge base. Shreenabh hasn’t found the media coverage demanding. Does he feel uncomfortable being called a child prodigy or a genius? “I’ve got used to it. I feel like I’m in my rightful place,” muses Shreenabh.

There are many child prodigies who rebel later for the push and aggression of strenuously competitive parents at ages where they should have been playing with other children and doing other activities. Pushing talented children beyond what they would normally like to do is misplaced and unnatural and has been found to be counterproductive to their development. Shreenabh’s parents are qualified and enlightened and are careful to ensure that their child doesn’t fall into this psychological trap. Incidentally, Shreenabh has a good support system of equally wise and empathetic grandparents.

Prodigies have a nature component that all the nurturing in the world can’t compensate for. There is a biological difference that kicks in with these kids and they become obsessed with their work. Spending time with the Agrawals, I was struck not only by their mutual devotion but also by the easy way they avoided the snobberies that tend to cling to such families. Father Moujesh is a technocrat in the Central government and mother Tinu is director of Prarambh, an HR organisation. They never expected the life into which Shreenabh has led them, but they have not been intimidated by the pressures. In pursuing it, Tinu seems to enjoy the diligence it needs to nurture such a child. She has honed it into an art. The challenge for prodigious children is the successful transition to adulthood. One can’t expect all of them to go on to become Albert Einstein.

“We want Shreenabh to be happy,” say his parents. “We want him to grow into a well-adjusted person capable of living a fulfilling life. We have not set the achievement bar too high for him. All we ask is that he is able to achieve his goals. We have tried to give him the tools and faithfully stood by him and set him on what we think is the right path. As parents, that’s the least we can do.”

The writer is a well known development professional