The leaders reviewed the situation in Ukraine, especially in the city of Kharkiv where many Indian students are stuck 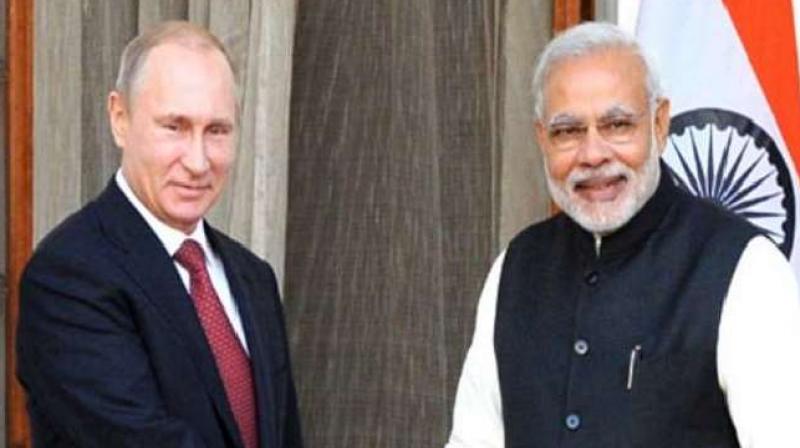 New Delhi: Prime Minister Narendra Modi spoke to Russian President Vladimir Putin on Wednesday and discussed the situation in the eastern Ukrainian city of Kharkiv, where many Indian students are stuck amid Russia ramping up its military offensive on Ukraine's key locations.

An official statement said the two leaders discussed the safe evacuation of the Indians from the conflict areas in Ukraine and reviewed the situation, especially in Kharkiv.

India asked Russia to facilitate the safe passage of Indians from various conflict zones after the killing of an Indian student in shelling in Kharkiv on Tuesday.

At a media briefing, Russian Ambassador-designate Denis Alipov said his country is working "intensely" to create a "humanitarian corridor" for a safe passage to Russian territory of the Indians stuck in Kharkiv, Sumy and other conflict zones in Ukraine.

The Modi-Putin telephonic conversation, the second between them in six days, came amid mounting concerns in India over the safety of the Indian students in Kharkiv that has been witnessing increasing fighting between Russian and Ukrainian troops.

"The leaders reviewed the situation in Ukraine, especially in the city of Kharkiv where many Indian students are stuck. They discussed the safe evacuation of the Indian nationals from the conflict areas," the statement said.

India asked its nationals on Wednesday to leave Kharkiv urgently to three nearby places "even on foot".

Modi held another high-level meeting on the Ukraine crisis on Wednesday night as the four Union ministers sent to Ukraine's neighbouring countries coordinated the stepped-up rescue efforts with the deployment of planes by the Indian Air Force (IAF).

In an urgent advisory, the Indian embassy in Ukraine asked the Indians to reach the Ukrainian towns of Pesochyn, 11 km from Kharkiv, Babai (12 km) and Bezlydivka (16 km) by 6 pm local time (9:30 pm IST).

The advisory came amid Russia stepping up its attacks on key Ukrainian cities and a day after an Indian medical student died in shelling in Kharkiv.

Ministry of External Affairs Spokesperson Arindam Bagchi said at a media briefing that the Indian embassy has asked the Indians to leave Kharkiv immediately on the basis of information from the Russian side.

"The students who cannot find vehicles or buses and are in railway station can proceed on foot to Pesochyn, Babai and Bezlydivka," the advisory, the second of the day, said.

It is learnt that the Russian side has informed India about the possible increase in intensity in fighting in Kharkiv and suggested that all Indians should leave the city.

Bagchi said India is also exploring the option of reaching the eastern parts of Ukraine to help in the evacuation of its citizens, but added that it is not easy as the route is not open at all times.

Alipov said Russia is working "intensely" to create a "humanitarian corridor" for a safe passage to Russian territory of the Indians stuck in the conflict zones in Ukraine.

Alipov said Russia is in touch with Indian authorities on the issue of Indians stuck in Kharkiv, Sumy and in the areas northeast of Ukraine.

He hoped that the humanitarian corridors will be put in place "as soon as possible".

As India shored up efforts to evacuate its citizens, four C-17 Globemaster aircraft of the IAF with approximately 800 evacuees from Ukraine are slated to land at the Hindon airbase on Thursday, sources said.

Bagchi said the cities in eastern Ukraine remain areas of concern and that some Indian students were able to board trains out of Kharkiv on Tuesday night and Wednesday morning.

He said there has been a sharp increase in the number of Indians who have left Ukraine in the recent past.

"We now estimate that nearly 17,000 Indian nationals have left Ukraine's borders since our advisories were issued. This of course includes some Indians who had not registered with the embassy earlier," he added.

Earlier, the MEA had said 20,000 Indians were in Ukraine when India had issued the first advisory in mid-February.

Bagchi said the number of flights under "Operation Ganga" has increased sharply and that six flights landed in India in the last 24 hours, taking the total to 15.

He said the total number of Indians who have returned on board these flights is 3,352. Of them, 1,796 were evacuated through Romania, 430 through Poland and 1,126 through Hungary.

Modi has held a series of meetings since Sunday to spearhead India's efforts to safely bring back its nationals, asserting that this is his government's top priority.

Meanwhile, an Indian national -- Chandan Jindal -- died in Ukraine due to natural causes. He was in a hospital for the last few days after suffering an ischemic stroke.

'Leave Kharkiv now, even if on foot': India advisory to citizens

India asked all its citizens to immediately leave Kharkiv – the other city that is expected to fall soon to Russian forces after Kyiv was attacked on Tuesday. In an urgent advisory issued on Wednesday, the Indian Embassy in Ukraine asked all Indians to leave Kharkiv without any delay “for their safety and security” and proceed to Pesochin – nearly 11 kilometres farther, Babaye (12km) and Bezlyudovka (16 km in Belgorod, Russia) “as soon as possible” by foot or through any vehicle available.

The Embassy said under all circumstances Indians should reach these settlements by 6 pm Ukrainian time even as Indians said leaving the area in the absence of vehicles was nearly impossible and alleged they were not being allowed in trains. Ministry of External Affairs Spokesperson Mr Arindam Bagchi said the advisory is based on the Russian inputs. "We have not chosen the time," he said.

Kharkiv, a city near the Russian border, has been facing intense shelling for the last couple of days now leaving close to two dozen civilians dead including an Indian student. It is expected that the Russians will be trying to capture the city tonight. Foreign Secretary Harsh V. Shringla had spoken to the Russian and Ukrainian ambassadors in India demanding urgent safe passage for Indian nationals who are still in Kharkiv and cities in other conflict zones. The Russian ambassador-designate to India Mr Denis Alipov said on Wednesday in New Delhi that the Russian government is constantly in touch with the Indian side to provide safe passage to Indian nationals.

“We are in touch with the Indian authorities with regard to its citizens currently in Kharkiv, Sumy in the areas in the north-east of Ukraine. We will do our utmost to keep Indians up to date on what is happening. India has requested an emergency exit of its citizens. We are working to protect civilian life and to provide humanitarian corridors so that stranded Indians have a safe passage. Hopefully, it will happen in the very near future and Indian nationals will be safe and sound on Russian territory,” Mr Alipov said. He assured Russia will do everything to safeguard against any civilian casualties. Mr Alipov added that Russia will investigate the death of the Indian student.

However, the students in Kharkiv and other parts of Ukraine had a different tale of struggle to tell. “My daughter with 1000 other Indian students are stuck at Pivdennyi Vokzal Railway station. Ukrainians soldiers are threatening to shoot if they try to board the train. A missile blasted near the station by the Russian fighter,” said one parent. Students alleged that trains were not letting Indians in. However, it was later mentioned that the male students helped girls board the train first and leave the area as they waited to take the next train. The Indian said there aren’t enough bunkers too for them to take shelter.

“Those students who cannot find vehicles or buses and are at the railway station can walk to Pisochyn which is 10 km away. For those who are closer to Babaye and Bezlyudovka can proceed to these locations,” the embassy said.

One Dr Ishaan Kaul sent out an SOS: “Please help. I am stuck in Nova Astrakhan Luhansk Oblast with my wife and daughter . Here Russians have captured the territory. I am unable to leave from here. I have been trying to contact the embassy for many days but no one responds. I need help to move out of here please respond.”