India   All India  03 Apr 2018  Indians killed in Mosul were illegal immigrants, govt had no record: VK Singh
India, All India

Indians killed in Mosul were illegal immigrants, govt had no record: VK Singh

Gen VK Singh said that govt did not have any record of the 40 Indians as they had gone to Iraq through illegal travel agents. 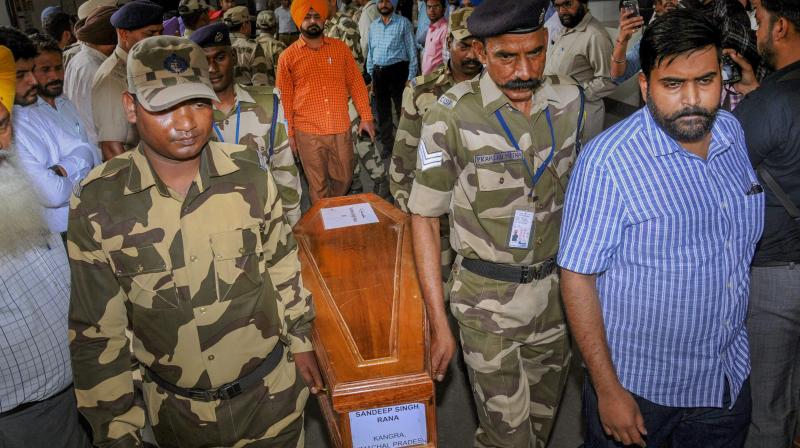 The bodies of the Indians were brought back on Monday in a special aircraft and handed over to their relatives or local authorities in Amritsar, Kolkata and Patna. (Photo: PTI)

New Delhi: Minister of state for External Affairs Gen VK Singh, who brought back the mortal remains of 38 of the 39 Indians killed in war-torn Iraq, said that Indian embassy did not have any record of the 40 Indians captured by the terror group ISIS in Iraq in 2014 as they had gone there through illegal travel agents.

Addressing reporters in Amritsar, Singh said had the government had any information about these people being in danger, it would have rescued them as it had done in case of over 45 Indian nurses in 2014.

Thirty-nine of the 40 Indian labourers were killed by the terror group, while one of them managed to escape posing as a Muslim from Bangladesh. Out of the 39 killed, 27 hailed from Punjab, four from Himachal Pradesh, six from Bihar and two from West Bengal.

The bodies of the Indians were brought back on Monday in a special aircraft and handed over to their relatives or local authorities in Amritsar, Kolkata and Patna.

Talking to reporters, Singh emphasised that both the state and central governments should work collectively to check illegal travel agents.

“We have told each state that law and order is their responsibility and they should catch illegal agents in their respective states and take action against them... We do not want anybody to go abroad illegally. We want people to go legally so that we have their record,” he said.

The minister also said it was not possible to ascertain when the Indians were killed.

"But we were told that it could be about one year (ago). But it is very difficult to say whether it is more than a year or less than a year (ago)," he said.

To a question, Singh said that the Iraq-based Martyrs Foundation had advised against opening of the caskets.

"The Martyrs Foundation has told us that the way toxic contents were found (from where the mortal remains were taken out) and the way all this was done (embalming of bodies) when you open the casket it may pose danger and that is why they said it is better not to open it," he said.

Asked how they were killed, Singh, a former Army chief, said that some of the persons were killed by bullets.

"When tests were conducted (on mortal remains) it was found that some persons were killed by bullets and however, in some cases, it is very difficult to say as to how they were killed," he said.

To a question on jobs being demanded by the kin of the victims, the minister said the union external affairs minister had already told them to provide detailed information about persons who were eligible for jobs.

The minister was also criticised  for his reported “insensitive” remark comparing the demand for compensation to the families of 39 Indians killed in Iraq to demanding "biscuits", and said it was "heartless, shameful and reprehensible".

"This is not like distributing biscuits, I do not have like a box of money in my pocket that I'll just declare the compensation right now, this matter concerns people's lives," he responded when asked whether he can give an estimate of the compensation the families will receive.