There are also items made with discharge printing, using citric acid on grey alum dye. 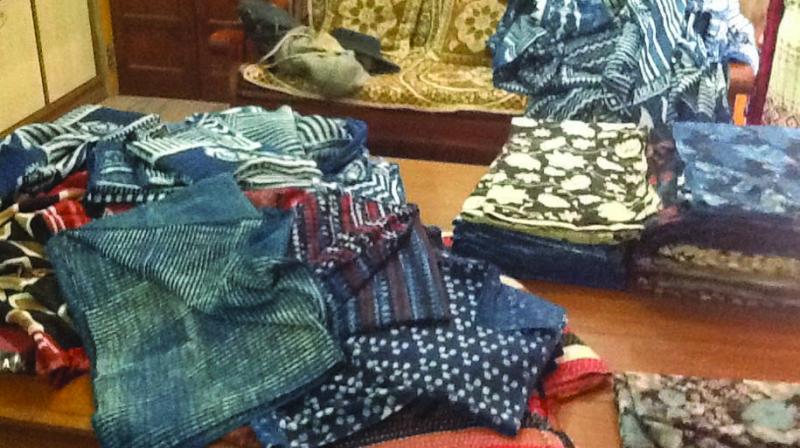 This story begins with a lehnga that I bought for my daughter’s birthday in Jaipur, many moons ago. It was a Rajasthani lehnga (skirt), made of blue printed fabric with the typical red border that one used to see in traditional lehengas of the area. During a long car-driven trip from Delhi to Bengaluru, my husband and I spent a day in Jaipur and decided to dine at the famous Rambagh Hotel, which we had not stepped in before. It was while spending time at the shop in the hotel that I discovered the perfect birthday gift — this beautiful lehnga.

My next visit to Jaipur was almost two decades later, to attend a conference. While wandering with other members at the conference through the city’s unique shopping area, I was hoping that I might find another lehnga – this time as a gift for a friend’s daughter. Strangely there seemed to be no traditional lehngas on sale. On enquiring, I was told that I should consider checking out one of the government emporiums. Since time was short, the visit to the emporium never happened. 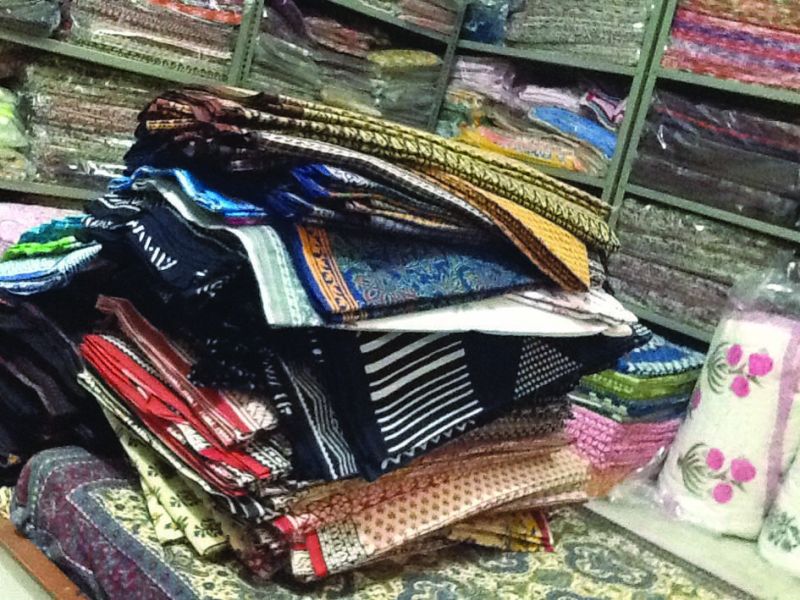 Over the years I had been told that the printed fabric of my daughter’s lehnga was from Bagru, Rajasthan’s famous hub for hand block printing. It took a great many more years till I finally managed to make the trip to Bagru last year and another earlier this month, where I finally discovered what I was looking for. I was able to understand how much effort had gone into the creation of the fabric of my daughter’s rather historical lehnga!

So off we went to Bagru! Located 30 miles away from Jaipur on the highway to Ajmer, Bagru is known to have been the “home of the Chippas (block printers)” for almost 500 years. This small town appears to have more tourists than many other parts of Rajasthan, to begin with. It even has a ground-level fort that is still in good shape as well as a number of historic mansions, which can be visited. A somewhat ruined royal chattri can be seen as one enters this small town. 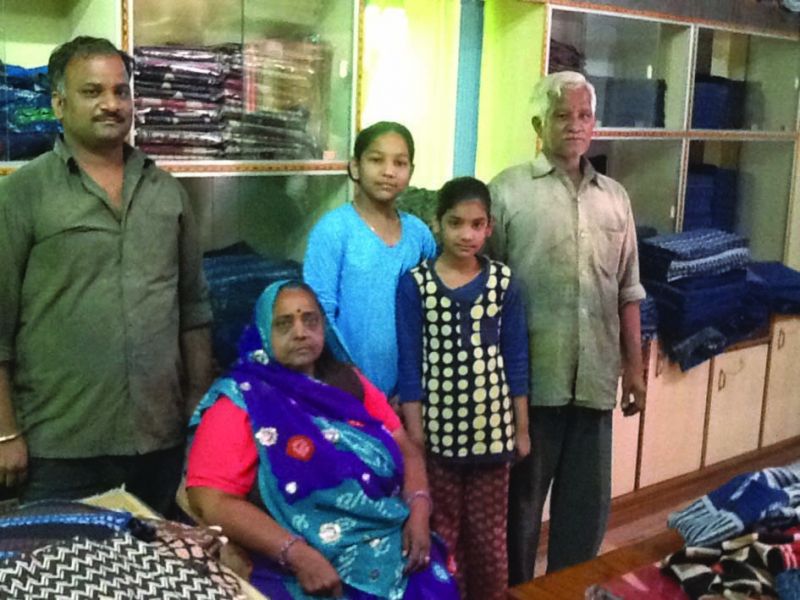 The Tirtanwala family of Bagru with national awardee Suraj Narain to the right, Narain recently created a museum in his house, based on the hand block prints of Bagru.

Here in Bagru, the craft of printing has been passed down from generation to generation, from as far back as the reigns of the Mughals. We might even say that the large number of Chippas clustered together in Bagru, run what could be called a flourishing and thriving cottage industry. The designs carved on wood are among the best-known designs of Rajasthan — and each Chippa family carefully preserves the blocks created by their ancestors, with new designs and prints being added.

At what could be referred to as the “Chippa Colony”, the ground and the concrete walls are covered in resplendent colours, where dyed or printed fabric is spread out to dry. What is amazing is that many of these printed fabrics that have already gone through so many difficult and tedious processes are spread out to dry on the ground and allowed to be covered with dust and sand. Then like a miracle, after the final wash, this same fabric becomes the beautiful textile that we see and admire at stores and boutiques. 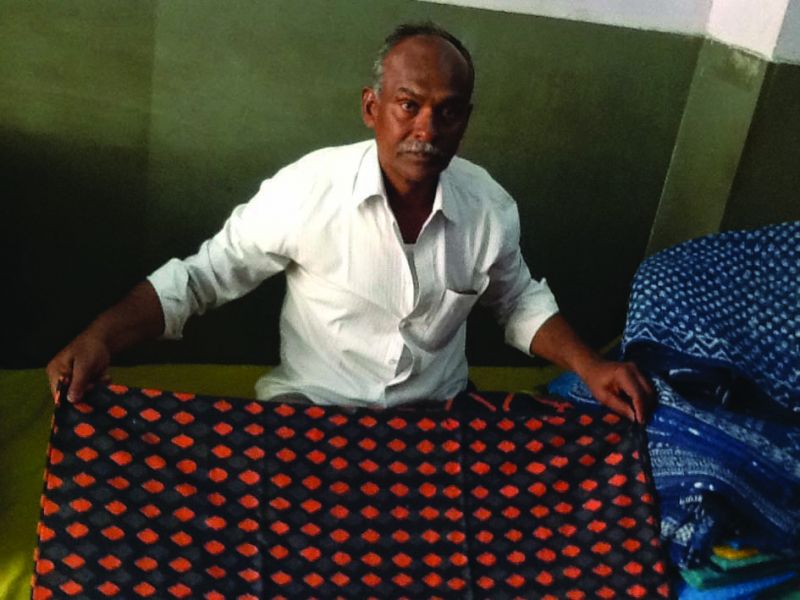 At Bagru, I had the good fortune to meet the Tirtanwala family, whose brand, “Sunrise”, has been catering to the needs of some of India’s best-known boutiques for many years. The patriarch of the family, Suraj Narain, a national awardee, has recently created a museum in the basement of his home. Here the method and creation of some of the oldest designs in Bagru are represented, along with the wooden blocks used to create them. From the information given, one realises the vast amount of work it takes to create what looks like a simple printed piece of cloth. It was here that I spied the print of the fabric that had been used to make my daughter’s lehnga. While no one could confirm that it had been made on these premises, I was quite sure, my search was over.

From the Tirtanwala family, I visited the tiny showroom of another national awardee, Jugal Kishore. It was he who gave me another insight on the textiles created in Bagru. According to him, Bagru prints can usually be recognised by their colour — the cloth is usually cream-coloured or has a dyed base. Prints used by Bagru Chippas are often geometrical shapes — such as jaali adapted from architecture, kangura (triangles), chaupad (checks) or leher (waves).

A Chippa plans the number of blocks he needs to use, by the number of colours and shapes in the print design. On an average, a printer needs at least four or five blocks to create a hand-block-printed textile design. The making of these blocks can take a couple of days to be carved perfectly and the most popular woods used are sagwaan, sheesham or rohida. Once the block’s design has been sketched on paper, the pattern is drawn directly on the blocks of wood. The carver then uses his skill with drills, chisels, hammers and files to recreate the pattern on the block.

Preparing the fabric for printing is a not an easy task. Once the fabric has been chosen, it has to be vigorously washed to remove starch or oils to make it printable. Before printing on any fabric, it is first soaked in harda — a natural mordant which gives the fabric a distinct yellowish colour and more importantly, ensures fast colours on the fabric.

For regular hand block printing, the Chippa dips the wooden printing block in the dye tray before pounding the block onto the fabric with his or her fist. Traditional Bagru prints use dark (or coloured) patterns on cream or dyed backgrounds. Another technique, called dabu, creates light-coloured motifs on a dark background using mud-resist printing. There are also items made with discharge printing, using citric acid on grey alum dye.

The black dye is made in a very special way. Horseshoes are kept on hot coals for long periods and then cleaned to remove rust. The horseshoes are then kept in containers of water and sugarcane juice and allowed to ferment for at least two months to ensure that the dye is dark and as permanent as possible. Blues are made from indigo, stored in dye vats that are at least, 10 to 12 feet deep. The essential red dye is made in different hues by mixing varying proportions of fitkari (alum), lal mitti (madder) and babul gond (acacia).

What I really learnt during my visit was that the natural environment plays a major role in the creation of Bagru’s prints. Water, mud, wood, plants, wind and dust all contribute to the making of its splendid creations. Despite the sparse rainfall, the Chippa clan has learnt to preserve water, often using their production water for irrigating crops. It has managed to survive over a great many years. Let us hope that they will be able to continue to pursue their craft for many more generations to come.

The writer is an author, a professional communicator and an intrepid traveller