India   All India  03 Apr 2019  Women to march for their rights tomorrow
India, All India

Women to march for their rights tomorrow

It will begin from Mandi House at 11 am and culminate at Jantar Mantar. 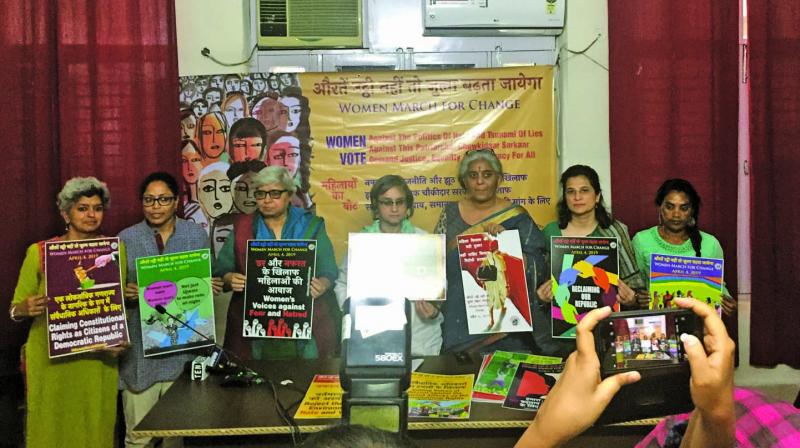 New delhi: It is the first time real women issues like land ownership, work and livelihood rights and freedom from gendered injustice are on their way to becoming part of the political agenda.

On April 4, numerous marches will be organised in towns and cities all over India when women from all income groups and all walks of life will come out to make their interests count and their voices heard. The march in Delhi will begin from Mandi House at 11 am and culminate at Jantar Mantar.

Setting the agenda on Tuesday, gender and development policy expert Soma K.P. said in terms of sheer numbers women’s best productivity has been in the field of agriculture and women constitute the majority of farmers. Yet only 12.7 per cent of them actually own land and hence miss out on the fruits of all the schemes the government provides for the kisan bhai. “It is in the interest of India’s food safety that this must be addressed,” Soma said.

She also mentioned how in the forest rights case currently being heard in the Supreme Court, in which claims filed by lakhs of dwellers have been rejected, the majority of those affected are women. “We are not satisfied with the Ujjwala Yojana that relegates the needs of women to making rotis only. Though it is time to talk about a universal service income rather than a uniform basic income. We are marching from every corner of the nation so that women’s voices, women’s rights and women’s struggles are recognised,” She added.

Social activist Anjali Bhardwaj linked the Aadhaar deaths in Jharkhand to crony capitalism and spoke of weakening of institutions. Crusader Nandini Rao raised the need for awareness and prosecution for the rampant gendered violence taking place in Chhattisgarh’s Bastar.

“We are uniting women from all income groups and social strata on issues of transparency, justice, democracy and the public good,” said scholar Dipta Bhog. “We want to lobby for our agenda, but we also have our own perspective, thank you.”

Since the experience has been bleak in terms of getting governments to notice women’s interests, let alone frame policies to include them, what about an all-women’s party to push forward this cause? After all, it’s only honourable that women should take responsibility for their own well-being, growth and excellence.

“It is not a new idea. There is a women’s party in existence; it’s called the Women Empowerment Party,” said human rights campaigner Shabnam Hashmi. “However, by your logic, only Hindus should speak for Hindus, Muslims for Muslims, and so on. Our struggle is not for women only, it is for the well-being of our nation and for justice.”