Andhra Pradesh, Tamil Nadu, Bihar and Himachal Pradesh have reported one death each 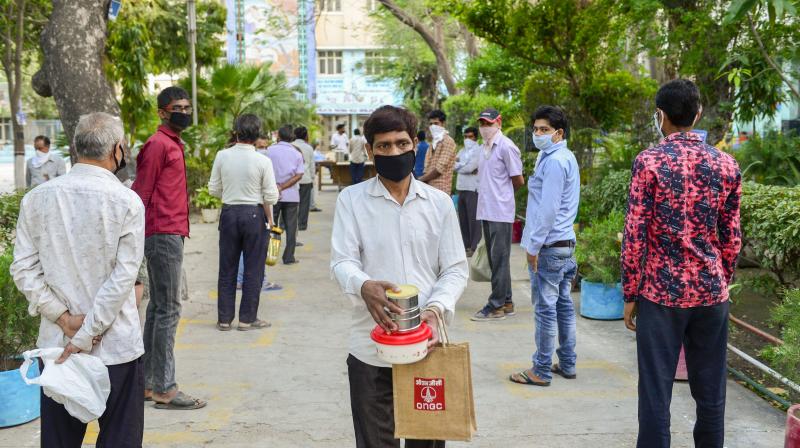 People stand in queues to collect food distributed at a government school during the nationwide lockdown, imposed in a bid to contain the coronavirus pandemic, in New Delhi. PTI photo

New Delhi: The number of COVID-19 cases climbed to 2,301 in the country on Friday while the death toll rose to 56, according to the Union Health Ministry.

The number of active COVID-19 cases stands at 2,088, while 156 people were either cured or discharged and one migrated to another country, the ministry stated.

The figure of 2,301 includes 55 foreign nationals.

As per the ministry's updated data at 9 am, three new virus-related deaths were reported from Maharashtra.

Andhra Pradesh, Tamil Nadu, Bihar and Himachal Pradesh have reported one death each.

The highest number of confirmed cases of the pandemic was reported from  Maharashtra at 335, followed by Tamil Nadu with 309 infections and Kerela with 286 cases so far.

Punjab has reported 46 cases, while 43 COVID-19 cases have been detected in Haryana. Bihar has 24, Chandigarh has 18, Assam has 16 and Ladakh has reported 14 cases so far.

Ten cases have been reported from the Andaman and Nicobar Islands. Uttarakhand has reported 10 cases while Chhattisgarh has nine positive patients so far. Goa and Himachal Pradesh have have reported six coronavirus cases each. Odisha has five cases while Puducherry has three cases.