The number of active COVID-19 cases stands at 2,322, while 162 people were either cured or discharged and one had migrated 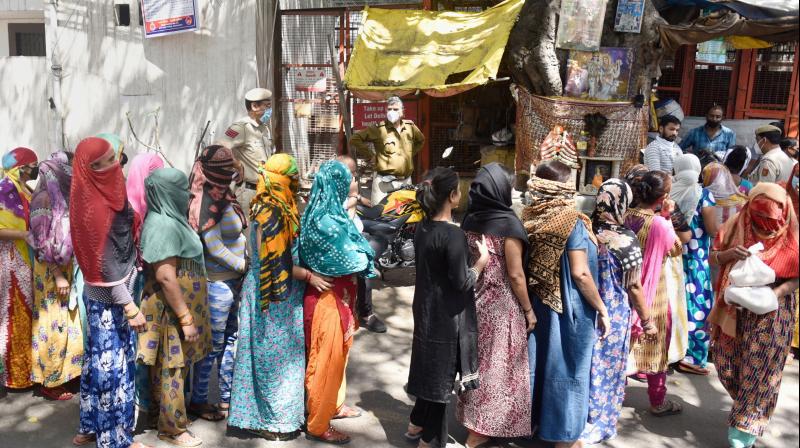 Sex workers queue to collect ration being distributed by the GB Road Market Assosiation during a nationwide lockdown amid the coronavirus outbreak, in New Delhi, Friday. PTI photo

New Delhi: The number of COVID-19 cases climbed to 2,547 in the country on Friday while the death toll rose to 62, registering a jump of 478 cases, according to Union health ministry data.

The number of active COVID-19 cases stands at 2,322, while 162 people were either cured or discharged and one had migrated, the ministry stated.

In an updated data at 6 pm, six fresh deaths were reported. Four were from Telengana and one each from Gujarat and Punjab.

Tamil Nadu, Andhra Pradesh, Bihar and Himachal Pradesh have reported a death each.

The Indian Council of Medical Research (ICMR) said a total of 69,245 samples have been tested as on April 3 (9 pm) and 2,653 individuals have confirmed positive among suspected cases and contacts of known positive cases in India.

As per the health ministry data, the 2,547 figure includes 55 foreign nationals.

Generally there is a lag between the ministry data and the figures reported by different states due to some procedural delays in assigning individual figures to states.

According to the health ministry, the highest number of confirmed cases of the coronavirus infection was reported from Maharashtra at 335 followed by Tamil Nadu with 309 infections and Kerela with 286 cases.

The cases in Karnataka have risen to 124, Madhya Pradesh has reported 104 cases so far, Gujarat 95 while Jammu and Kashmir has 75 positive patients.

The number of cases have risen to 63 in West Bengal. Haryana has reported 49 cases of COVID-19 so far followed by Punjab with 48 cases.

Ten cases have been reported from the Andaman and Nicobar Islands.

Uttarakhand has reported 10 cases while Chhattisgarh has nine positive patients.

Goa and Himachal Pradesh have have reported six coronavirus cases each. Odisha  and Puducherry have five cases each.

"Remaining 77 cases are being reassigned to states for contact tracing," the health ministry said on its website.