If needed, docctors, paramedical staff to get paramilitary cover along with police protection 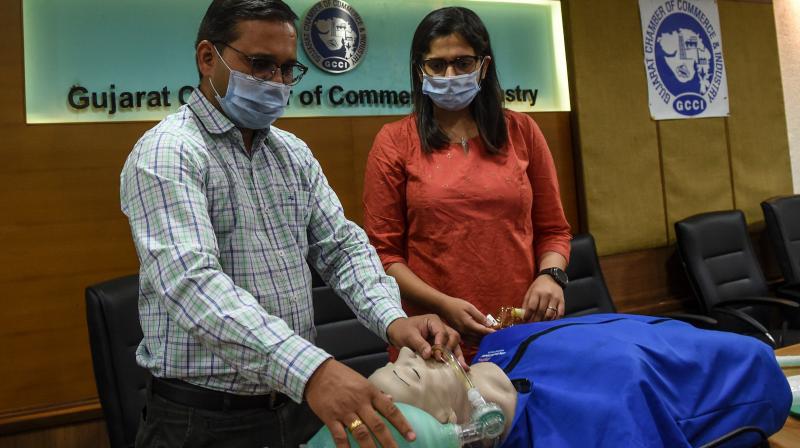 Doctors demonstrate techniques to help breathing on a dummy at a workshop at the Gujarat Chambers of Commerce and Industries in Ahmedabad. (AFP)

New Delhi: Taking serious note of attacks on doctors and paramedic staff in some parts of the country, the Union Home Ministry has asked states to take immediate measures to ensure foolproof security for them, going to the extent of providing them paramilitary cover.

“We have come across reports and some incidents where medical teams have been attacked by the public when they went to test them for coronavirus or to shift them to quarantine facilities. All states have been directed to deal with this firmly and ensure that foolproof security measures are put in place for the medical teams,’’ a senior ministry official said.

All state police departments have been directed to register cases under stringent laws against those involved in such incidents of arson and attacks.

In another important advisory to the states, the Home Ministry further directed the states to check the spread fake news and false information or propaganda. Ministry officials said there were reports that the main reason for attacks on doctors and medical teams was spread of false and mischievous information on different social media platforms.

Thus, the police has been asked to closely track social media platforms and immediately identify any false or fake news and initiate "immediate and stringent action.’’

“We are working at different levels with the states and closely coordinating with them to ensure that cases of corona remain under check and the infection doesn't spread to stage 3 or the community level. Thus even on Thursday we again asked the States to strictly enforce the lockdown and widely publicise the penal provisions for its violations,’’ an official added.