N Chandrababu Naidu told reporters that the precise movement of the cyclonic storm could be predicted by the RTGC. 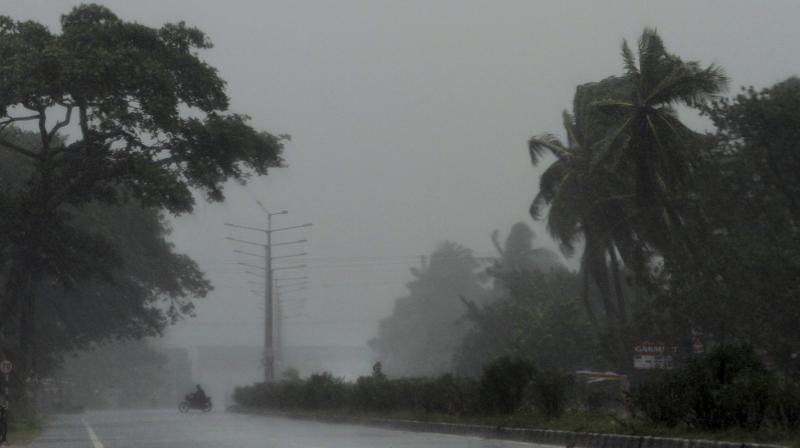 Amaravati: Rains lashed parts of Srikakulam district of Andhra Pradesh as a fall out of Cyclone 'Fani', which hit the Odisha coast Friday, but no human casualties have been reported, officials said.

Nine head of cattle and 12 sheep were killed in rain-related incidents, while over 2,000 electricity poles were uprooted because of high velocity winds and 218 cellular phone towers damaged, they said.

The extremely severe cyclonic storm made landfall at around 8 a.m. in Puri but thanks to enough advance warning, about 11 lakh people had already been evacuated from vulnerable and low-lying areas of at least 11 coastal districts of Odisha by Thursday.

The Andhra Pradesh government's Real-Time Governance Centre, which tracked the cyclone's movement round-the-clock for the last two days and predicted the exact landfall at Puri, came in for praise from the Odisha government.

Andhra Pradesh Chief Minister N Chandrababu Naidu told reporters that the precise movement of the cyclonic storm could be predicted by the RTGC. "The Odisha government was all praise for our RTGC as it delivered valuable information about the storm. The damage could be minimised because of the accurate warnings and also loss of human life averted," he said.

The Election Commission of India, in response to a letter written by the state Chief Electoral Officer Gopal Krishna Dwivedi, relaxed the provisions of the Model Code of Conduct in Srikakulam, Vizianagaram, Visakhapatnam and East Godavari districts in view of the cyclone threat. The exemption granted by the ECI was to take necessary relief measures in view of Fani.

Srikakulam district collector J Nivas directed officials to remain alert as there was a likelihood of floods in Bahuda and Vamsadhara rivers because of heavy rains in Odisha.

Meanwhile, an official release said the cyclone's impact was felt in 145 villages spread over four revenue mandals and two towns. As per preliminary estimates, horticulture crops in 406 hectares, paddy in 187 hectares, commercial crops like groundnut, cotton, maize, tobacco and sunflower in 555 hectares suffered damage in the rains.

The release said 3,334 families have been sheltered in relief camps. Ichchapuram and Kaviti mandals in Srikakulam district, bordering Odisha, received the maximum 23.25 cm of rain from 8.30 am to 4.30 pm. In other places in the district, rainfall ranging from one cm to 8 cm was recorded, according to the State Disaster Management Authority. As many as 2,129 electricity poles were uprooted because of high velocity winds while 218 cellular phone towers were also damaged. As adequate number of new poles were kept ready, the damaged ones would be replaced on a war-footing.

The South Central Railway said four Express trains on the east coast section were cancelled over the next three days due to the cyclonic storm. A special Express train has been arranged from Visakhapatnam to Mumbai on Friday to clear the rush of passengers stranded due to cancellation of several trains.

East Godavari district Collector Kartikeya Misra said 82 people from Hope Island off Kakinada were shifted to a relief camp in the city. Another relief camp was opened for 250 people belonging to U Kothapalli mandal, he said. "We continue to remain alert though the cyclone threat has vastly subsided," Misra added.