Those contesting 37, 38 seats aspiring to be PM: Yogi on Mahagathbandhan

Adityanath said that Akhilesh was frustrated as he was being treated as an underdog in the alliance with the BSP. 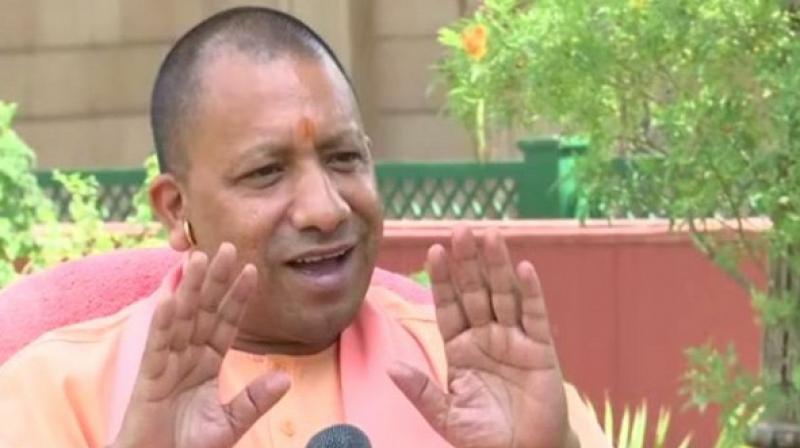 The EC had on May 2 served a notice to the UP Chief Minister over his 'Babar ki aulad' remark made during a rally in Sambhal on April 19. (Photo: ANI)

Lucknow: Uttar Pradesh Chief Minister Yogi Adityanath on Friday hits out at 'Mahagathbandhan', saying that their leaders aspire to become Prime Minister, even as they are contesting on just 37-38 seats.

"At least 272 seats are needed to become the Prime Minister. Only the BJP has this capacity. Those who are contesting on just 37-38 seats, will they become Prime Minister?" Yogi told ANI in an exclusive interview.

"Those times are gone. People now want a stable government," he asserted when drawn attention towards H D Deve Gowda, who was made the prime minister in 1996 when the United Front- a conglomeration of non-Congress and non-BJP regional parties- decided to form the government.

Mayawati, the BSP supremo, last month had said that she would use her experience as former UP Chief Minister "if we get an opportunity."

When asked about Mayawati's claim that the next PM would be from UP, Adityanath said, "Modi ji is from UP. He contested the last election from Varanasi and is seeking re-election from the seat which is in Uttar Pradesh. This is good that she supports us. I thank Mayawati Ji for supporting Modi Ji."

Sharpening his attack on Akhilesh Yadav, Adityanath added that Akhilesh was frustrated as he was being treated as an underdog in the alliance with the BSP.

"This is the frustration of Akhilesh Yadav. He is frustrated because the SP once won 37 (Lok Sabha) seats from UP under the leadership of Mulayam Singh Yadav. Now, the poor guy is contesting only 37 seats," the UP chief minister commented.

"When he sits with Mayawati on the dais, he is seated on a small chair while Mayawati herself sits on a bigger one. When he goes to meet Mayawati, he is asked to keep his footwear out of the room. This is his position. He is expressing his frustration against us," Adityanath added.

Yogi continued with his attack on Samajwadi Party president Akhilesh Yadav, questioning the Samajwadi Party chief over his comments that Yogi Adityanath stopped SP government's laptop distribution schemes as he himself does not know how to operate a computer.

"See, we have not fooled people in name of laptop. Why did they stall the unemployment allowance? Why did not they distribute computers to all? Why did they stop their schemes in the middle?" Adityanath commented.

"We completed each scheme we started. We completely waived off farm loans, we completely shut down illegal slaughterhouses, we gave ration cards to all, we gave scholarship to SC, ST students of the states," he said.

He also questioned the Election Commission, saying that the poll body did not take action against Yadav for his comments allegedly violating the Model Code of Conduct.

“Do we go to the dais to sing devotional songs? We go there to defeat the opposition party and hit out at them,” Uttar Pradesh Chief Minister Yogi Adityanath said on Friday.

Adityanath was referring to the show cause notice issued to him by the Election Commission (EC) over his recent controversial remarks while campaigning for Lok Sabha elections.

"Our work is to highlight the opposition's weakness in front of the people. We do not mind it even when Congress or Samajwadi Party (SP) 'abuse' us during their election campaigning. If we revert, why are we called wrong?" Adityanath said while sharpening his attack on the opposition.

The EC had on May 2 served a notice to the UP Chief Minister over his 'Babar ki aulad' remark made during a rally in Sambhal on April 19.

Yogi claimed how he once asked SP's Sambhal candidate Shafiqur Rahman about his lineage, to which Rehman said he was "Babar ki aulad".

"The speaker had also condemned it during that time. To take an action on the conversation that had happened between two people does not come under the purview of the Election Commission. If I do not quote such a thing in my election rallies, then what else do I do?" he further stated.

The "Babar ki aulad" comment stirred controversy as it came in his first rally after the poll body barred him from campaigning for 72 hours for allegedly making comments amounting to the violation of the Model Code of Conduct.