India   All India  03 May 2020  Misery of migrants: 14 labourers ‘rescued’ from concrete mixture truck
India, All India 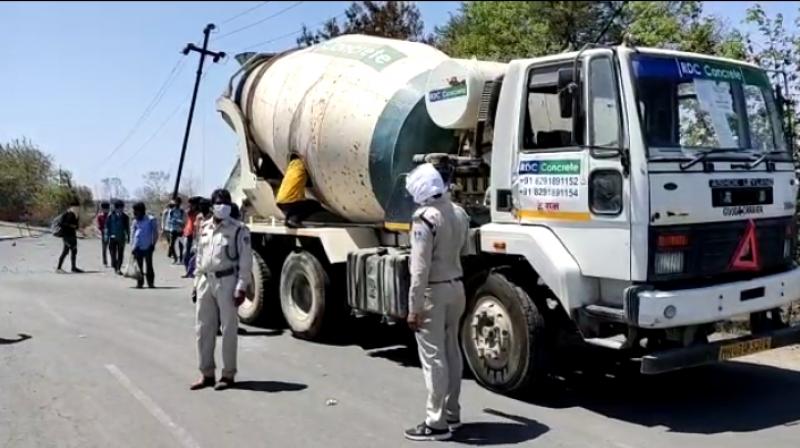 Bhopal: The ‘reverse migration’ triggered by coronavirus pandemic has unfolded many a tragic tale involving migrant workers of Madhya Pradesh.

Traffic cops manning the Indore-Ujjain highway at Panth Piplani on Saturday could not believe their eyes when they spotted 14 labourers being carried inside a concrete mixture making machine to their native place of Lucknow from Pune in Maharashtra to beat the lockdown provisions.

“The movement of the vehicle carrying the machine sparked suspicion among us since no construction work was going on in any part of the country due to the nationwide lockdown.

We heard feeble noises coming from the container when we went closer to it. Later, we found 14 labourers inside it”, one of the traffic policemen who rescued the labourers said.

Just a couple of days ago, a 46-year-old man, a resident of Maharajganj district in Uttar Pradesh collapsed at Bijasan in Barwani district, while cycling around 400 km from Bhiwandi in Maharashtra along with a group of 11 people to return home.

The deceased identified as Tabrat Mansoori felt uneasy and collapsed, according to in-charge of Bhairavgarh police station V S Parihar.

In the wee hours of April 19, three labourers including a woman were run over by a speeding truck when they were sleeping roadside at Unher-Mohanpura in Ujjain district.

They were part of a 12-member-group who had begun their journey to home in Mohanpura in Ujjain district from Jaisalmer in Rajasthan.

The labourers were dropped at the Madhya Pradesh border by a bus arranged by Rajasthan government to send them to their homes.

The migrant workers were tired and slept on the roadside, leading to the tragic incident.

“The migrant labourers preferred to die in the arms of their family members rather than die in an alien land. The fear psychosis created by all kinds of rumours involving coronavirus outbreak had prompted them to return their homes without bothering that it would cost their livelihood”, noted food rights activist Sachin Kumar Jain who conducted study on reverse migration caused by the pandemic told this newspaper on Saturday.

Hundreds of people including women and children walked even 500 km- 700 km to reach their village due to lack of transportation modes.

“We walked around 200 km to reach our home in Umeria from Jaipur where I was working as a construction worker. We survived on some dry roties and a few red chili during our 4-day-journey.

We were viewed with suspicion by people along the way as they thought that we may be Covid-19 patients”, Lalu Singh who returned home along with his family of four told this newspaper.

Chander Pal of Satna who had returned from Jaipur recent along with a group of 15 villagers by walking recounted how they refrained themselves from using makeshift shelter homes built by the locals at many places along the way for migrants fearing that they may contract infection.

Hundreds of migrant workers were forced to turn open roads as their temporary abode when they were blocked at the borders of MP by the police.

Many of them had to spend a day or two without food before being allowed entry into MP after being screened by medical personnel.

Around 500 migrant workers who were returning from different places in Gujarat to their homes in Jhabua were blocked at the border leading them to stage demonstration on Saturday.

According to an unofficial estimate, nearly 35,000 migrant workers have already returned to their homes.

“We are making arrangements to bring around one lakh migrant workers working in different states, back to their homes”, chief minister Shivraj Singh Chouhan said.

As on Saturday, MP has reported 2788 coronavirus positive cases and 151 deaths caused by the pandemic.