India   All India  03 Jun 2018  Clashes at funeral of youth mowed down by CRPF car
India, All India

Clashes at funeral of youth mowed down by CRPF car

As the funeral was on, the security forces burst teargas canisters into the crowd, injuring dozens of mourners, the witnesses said. 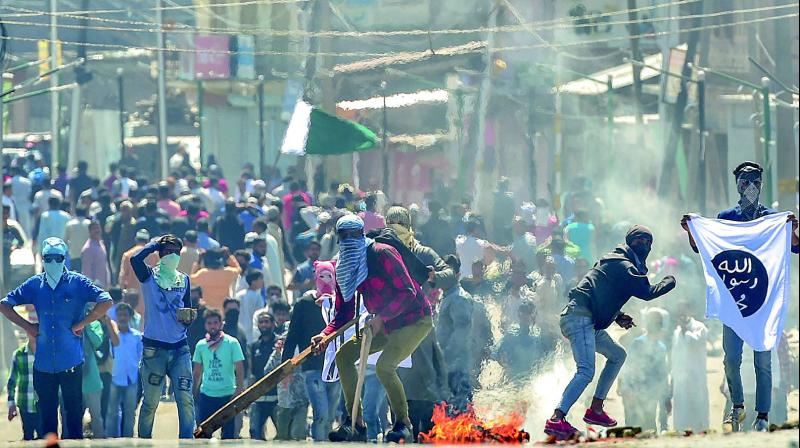 Protesters, amid tear smoke, throw stones and bricks on the police during a clash, in Srinagar. (Photo: PTI)

Srinagar: Protests and clashes erupted in central Srinagar on Saturday during the funeral of a 21-year-old local youth who died after he was mowed down by a CRPF vehicle during stone-pelting in City’s Nowhatta area a day ago.

The condition of one of the two other city youth also injured in the CRPF’s action is stated be critical. Following the incident which has sparked anger in Kashmir, the J&K police have registered two separate cases against the CRPF and the protesters.

The FIRs have been registered under Sections 307 (Attempt to murder) and 279 (rash driving) 148 of the Ranbir Penal Code (RPC) against the CRPF and Section 148 (Rioting, armed with deadly weapon) against the protesters among other sections including sections 149, 152, 336 and 427.

Confirming the police have booked both the CRPF and protesters, Srinagar’s SSP Imtiaz Ismail Parray said, “We have lodged two cases with regard to the incident and further investigations are going on.”

Amid rising tensions over the incident, large contingents of J&K police and Central forces were fanned out across central Srinagar at dawn on Saturday to enforce a security lockdown. However, thousands of residents after violating the curfew-like restrictions poured out on the streets to chant pro-freedom slogans. Many of them relocated to Srinagar’s Fateh Kadal area to join the funeral procession of the slain youth, witnesses said.

As the funeral was on, the security forces burst teargas canisters into the crowd, injuring dozens of mourners, the witnesses said. Subsequently, the mourners loaded the casket onto a truck which was quickly driven to Srinagar’s Eidgah ‘martyrs’ cemetery’ where the victim Kaiser Bhat was laid to rest amid chants of “God is great” and “We want freedom”. Soon again, the security forces resorted to massive teargas shelling against the mourners following which intense clashes and stone-pelting incidents broke out at many places in central Srinagar.

Earlier the authorities suspended mobile internet services across Srinagar district and neighbouring Budgam district “as a precautionary measure.” The speed of broadband Internet connections on fixed line has also been brought down to prevent uploading of “provocative posts and pictures.” Also rail services between north-western Kashmir’s Baramulla and the Bannihal town in Jammu region were suspended for the day.

Jammu Kashmir Liberation Front chairman Muhammad Yasin Malik was taken into preventive custody by the police from his house in Srinagar’s Maisuma area. Another key separatist leader and Kashmir’s chief Muslim cleric Mirwaiz Umar Farooq was placed under house arrest following which he took to social media to condemn the killing of the youth.

He tweeted, “Downtown put under curfew, Internet snapped while I placed under #HouseArrest barring me from addressing a rally on occasion of Jung-e-Badr. All this while we lost another 21 year old youth Kaiser Bhat to Indian occupation as he was mowed to death by a CRPF vehicle. Deeply grieved!”

Former Chief Minister and opposition National Conference (NC) working president Omar Abdullah while reacting to the incident asked present incumbent Mehbooba Mufti to explain if driving jeeps over protesters was the new standard operating procedure of her government. “Earlier they tied people to the fronts of jeeps & paraded them around villages to deter protestors now they just drive their jeeps right over protestors. Is this your new SOP @MehboobaMufti Sahiba? Ceasefire means no guns so use jeeps?” he wrote on micro-blogging site Twitter.com.

Meanwhile, a shutdown called by ‘Joint Resistance Leadership (JRL)’, an alliance of key separatist leaders including Syed Ali Shah Geelani, the Mirwaiz and Mr. Yasin Malik, disrupted normal life elsewhere in the Valley. Shops and other businesses and educational institutions remained closed and public transport was off the roads at most places. However, auto-rickshaws and private transport was seen plying in uptown Srinagar and city outskirts.

The JRL had asked people to suspend their work and hold peaceful protests against what is alleged was desecration of Srinagar’s historic Jama Masjid (Grand Mosque) by security forces while confronting stone-pelting mobs at Nowhatta on May 25 (Friday), damaging of private properties including residential houses and orchards by the Army in southern parts of the Valley and vandalizing the grave of Hizb-ul-Mujahideen commander Sameer Tiger.