India   All India  03 Jun 2018  Curfew in parts of Shillong after clashes erupt
India, All India

Curfew in parts of Shillong after clashes erupt

Curfew was imposed at 4 am Friday in at least 14 localities and Internet services have been suspended. 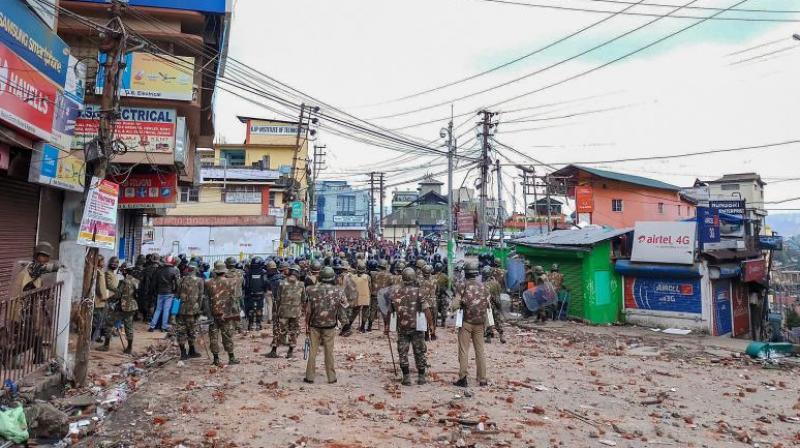 The police had to resort to lathicharge and firing teargas shells to disperse the rioters. (Photo: PTI)

Guwahati: Curfew has been imposed in some parts of Meghalaya’s capital Shillong after violence and arson erupted on Friday night when a group of bus drivers clashed with the residents of a colony over a parking issue. The altercation, which began in Them Metor area, escalated and spread to other parts of the city leaving at least 10 people, including a senior police officer, injured.

A violent mob torched a shop, a house and damaged at least five vehicles. The police had to resort to lathicharge and firing teargas shells to disperse the rioters.

Curfew was imposed at 4 am Friday in at least 14 localities and Internet services have been suspended.

The Army was also called in to conduct flag march in the affected areas. Army also rescued about 500 people, including 200 women and children, defence spokesperson Ratnakar Singh said.

While chief minister Conrad K. Sangma has appealed for calm and urged people to help bring back normalcy in Shillong, superintendent of police (East Khasi Hills) Davies Marak said, “The situation is very tense. We have arrested a number of stone-pelters.”

The violence, in which police personnel were attacked by stone pelters in the restive Motphran area of the city and superintendent of police (city) Stephan Rynjah was hit by a rod, has triggered demands that the government move the alleged illegal settlers and take action against the perpetrators of violence.

Trouble began started on Thursday after a bus handyman was allegedly assaulted by a group of residents of Them Metor area.

The argument escalated after a rumour went viral on social media that the handyman, who was a local, had succumbed to injuries, prompting a group of bus drivers to converge at the colony and attack the residents. The police had to fire teargas shells to disperse them.

The handyman and three injured persons were taken to a hospital where they were released after being administered first-aid, police said.

Residents of the Them Metor area admitted that it was a parking dispute followed by verbal abuse that mobilised a huge mob that turned violent.

The intervention of Army, police lathicharge and tear-gas led to the rescue of hundreds of people from Punjabi Line also known as Sweepers’ Lane, they said.

Lambor Malniang, an independent MLA representing the area, told reporters that the violence was linked to brewing discontent over delay in shifting sweepers in the area to Nongmynsong.

“It is time to rehabilitate them immediately. We should not allow people from other communities to assert authority over our land,” he said.

Claiming that indigenous people could not walk through Sweepers’ Lane, he claimed that anti-social activities such as gambling thrived in the area and residents often harassed farmers.

Mr Malniang said that the incident was a wake-up call to put a stop to infiltration. “We are also minorities, so are they and we understand their situation. We are not asking them to go somewhere else without preparing a place for them. The government is not irresponsible as it is providing a residential place for them at Nongmynsong,” he added.

Several local groups, including the Khasi Students Union (KSU), the Federation of Khasi Jaintia and Garo People (FKJGP) and the Hynniewtrep Youth Council, have demanded that those involved in the assault of local men be punished and the illegal settlers at Them Metor be evicted.

The KSU leader also said that the government should evict illegal settlers at Them Metor which is adjacent to IewDuh.

“Them Metor has become a den for anti-nationals and it is sad that several governments in the past have not taken initiatives to evict them and provide them space somewhere else,” said FKJGP president Wellbirth Rani.