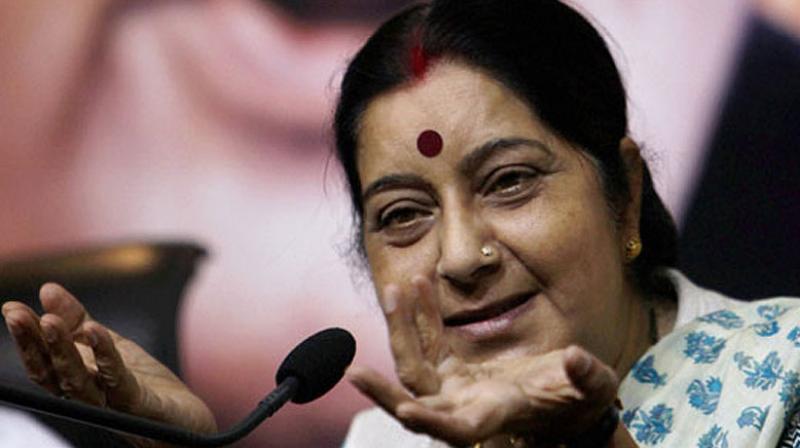 Port Louis/New Delhi: External Affairs Minister Sushma Swaraj's VIP flight from Trivandrum to Mauritius going incommunicado for around 14 minutes has been confirmed by authorities, however, they insist that it would not comprise a 'mid air scare' .

The Mauritius Air traffic control (ATC) room had activated INCERFA, the code used by the aircraft controllers during a phase of uncertainty, when Swaraj's plane crossed over from Indian air space to Male Air Traffic Control, Airports Authority of India (AAI) confirmed.

INCERFA was activated without allowing a lapse of a stipulated time period of 30 minutes since the aircraft last contacted the ATC. The authorities say Male ATC erred on the side of caution as an Indian Air Force Flight IFC31 was carrying a person with a VIP status.

Swaraj departed from Trivandrum at 2:08 pm for Mauritius. However, IFC 31 could not contact Mauritius ATC after entering its airspace.

A contact was only established at 4:44 pm when the aircraft changed over from Indian airspace to Male ATC.

Later at 4:58 pm, the flight came in contact with the Mauritius ATC and subsequently made a safe landing. However, when pressed further, sources in the AAI did not rule out a failure of onboard communication systems in the IAF plane carrying Swaraj.

The external affairs minister on Sunday had a brief stopover in Mauritius during her visit to South Africa to take stock of preparations for upcoming Vishwa Hindu Sammelan in August.

Raveesh Kumar, spokesperson of the Ministry of External Affairs Ministry, took to his Twitter handle to inform about the same.

Taking stock of the preparations for the Vishwa Hindi Sammelan in August 2018! EAM @SushmaSwaraj and Minister of Education of Mauritius, Leela Devi Dookun visited the Swami Vivekananda International Convention Centre (SVICC), the main venue of the World Hindi Conference. pic.twitter.com/qNJcQanhJQ