Akhilesh Yadav and his family vacated his bungalow at 4 Vikramaditya Marg on Saturday and moved to the VVIP guest house. 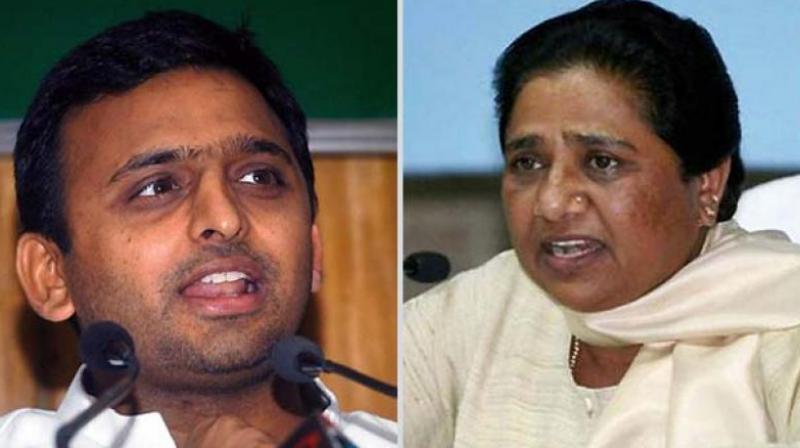 Lucknow: Samajwadi patriarch Mulayam Singh Yadav and Samajwadi president Akhilesh Yadav have finally vacated their bungalows. BSP president Mayawati, on Saturday evening, also announced that she had vacated the small portion of the 13 Mall Avenue bungalow where she stayed as caretaker of the Kanshiram Yaadgar Vishram Sthal.

The suites have been booked in the name of Mr Akhilesh Yadav, Ms Dimple Yadav, and party MPs Sanjay Seth and Surendra Nagar. Mr Mulayam Singh Yadav, in fact, left his bungalow on Friday night and stayed at the suite no 102 of the VVIP guest house and left for Delhi on Saturday. According to sources, the father and son will soon be shifting into four villas at the Ansal API Golf City on Shaheed Path. These premium villas in the new township are being given finishing touches and are likely to be ready to move in within a week. Each villa is said to cost `3 crores each.

Meanwhile, at a hurriedly convened press conference, Ms Mayawati said that that the bungalow for which the estate department had served her notice was actually a memorial for late Kanshi Ram and it was now the responsibility of the state government to ensure its maintenance and upkeep.

“I am shifting to my private bungalow at 9 Mall Avenue but the BJP has been publicizing that I am defying court orders. The sentiments of millions of Dalits is linked to late Kanshi Ram and his memorial here and I hope that the BJP government will give it due respect,” she said.

For the first time ever, Ms Mayawati allowed media persons to go through the bungalow and see the murals, library, photo gallery dedicated to late Kanshi Ram. She said that a statue of her mentor was also installed on the campus.

Among the other former chief ministers, Mr Rajnath Singh and Mr Kalyan Singh have already vacated their official bungalows.

Former chief minister Narayan Dutt Tiwari, however, is yet to vacate his residence at 1 Mall Avenue, Mr Tiwari's wife Ujjwala Tiwari had written a letter to chief minister saying that her husband was hospitalised in Delhi, and hence, she was not in a position to vacate the bungalow.

It may be recalled that the Supreme Court, last month, had ordered all former chief minister to vacate their official bungalows.