Shimla water crisis: Schools to be shut from June 4-8

Protests against water shortage in Shimla on Saturday had put the state government in the dock for having failed to curtail the situation. 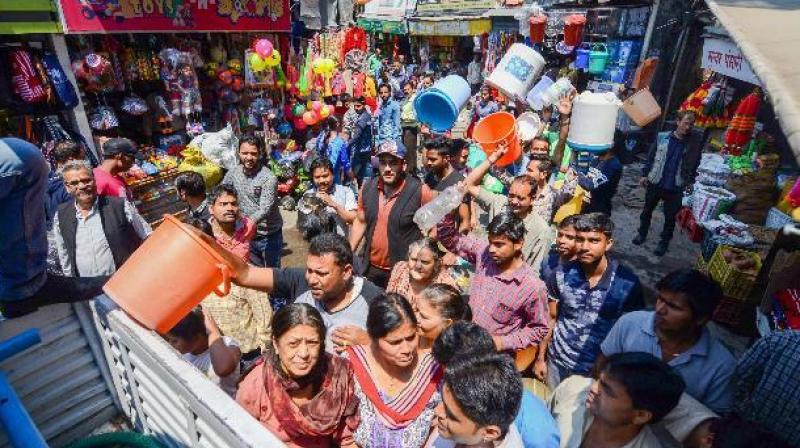 Tourists staying in several hotels in the city are being overcharged for bottled water, and are being supplied water in buckets. (Photo: PTI)

Shimla: In the wake of the ongoing water shortage in Shimla, the department of education ordered all government schools here to be shut from June 4 to 8. However, schools will remain open during the annual monsoon break, scheduled in July.

However, on Saturday the water supply was increased from 22.5 million litres per day to 28 MLD.

Protests against the water shortage in Shimla on Saturday had put the state government in the dock for having failed to curtail the situation.

Also Read: Amid Shimla's water woes, woman dies after being hit by tanker

Taking a serious note of alleged negligence in the supply of water, Irrigation and Public Health Minister Mahinder Singh ordered the suspension of Shimla Municipal Corporation SDO. Singh said the government would not tolerate any laxity by officials.

Residents have also been demanding the resignation of the Shimla mayor, deputy mayor and municipal commissioner.

Meanwhile, residents of Kasumpti, Mahli, Jiwanu, Panthaghati and a few other colonies blocked roads in protest against inadequate water supply.

A group of two dozen women reached the water control room in Chotta Shimla carrying lathis and protested there.

Officials have cited rising mercury and drying up of natural water resources as the main cause of the crisis. The Himachal Pradesh High Court had banned the use of tankers to supply water, except for the Governor's and Chief Minister's residences, after there were reports that tankers were being used to supply water in posh areas.

Shimla has a population of nearly 200,000 that requires 42 million litres per day (MLD) water. Bottled water prices in the town have inflated sharply due to the crisis, while hotels have been providing water to guests in buckets.