The BJP allies — the regional AGP and Bodoland People’s Front — contested on four seats but failed to open their account. 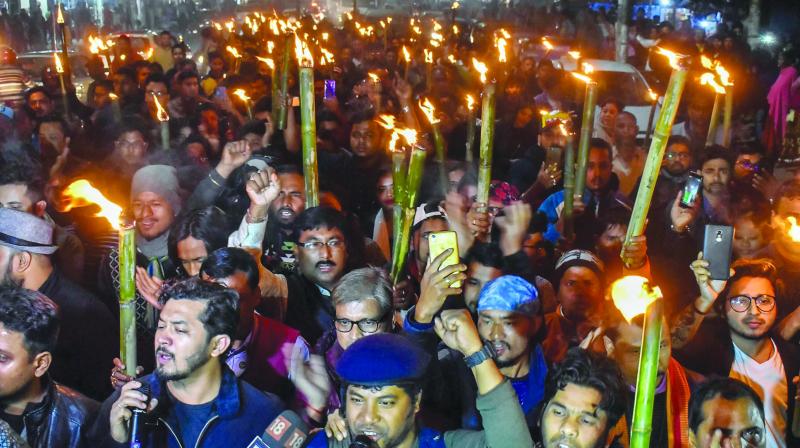 Guwahati: If result of the Lok Sabha elections is any indicator, Assam and Northeast has rejected the narrative created against the Citizenship (Amendment) Bill 2016 by the intellectuals and regional outfits (Jatiya Sangthans) who at one point of time resorted to violent opposition against the saffron brigade across Northeast during the month-long elections.

The central issue of the just concluded Lok Sabha elections for all the Opposition parties, including the BJP allies, in Assam was Citizenship (Amendment) Bill 2016.

The saffron party swept the Lok Sabha elections in frontier state of Arunachal Pradesh by winning both the seats, the BJP got nine out of 10 seats which the party had contested in Assam. The BJP allies — the regional AGP and Bodoland People’s Front — contested on four seats but failed to open their account.

Assam finance minister Himanta Biswa Sarma who led the election campaign of the BJP asserted that the anti-CAB agitation started on a “wrong notion” by those who led it, which in fact turned the tide in favour of the saffron party.

“The CAB has had a positive effect on the BJP. It planned to give shelter to Hindu, Jain, Buddhist, Sikh brothers and sisters persecuted for following their religion in Bangladesh, Pakistan and Afghanistan. In fact I had spoken to people on the legislation and they asked me not to compromise and go for it. So, the agitation was based on a wrong notion,” he said.

“Finally, we have got MPs from Northeast who believe in the same political ideology and who are under one leader. The region is today fortunate to have a block of 19 to 20 MPs who are dedicated to the development of Northeast. Along with the parliamentarians and the eight states, we are confident that the Northeast will now be in the national mainstream,” he said.

It is significant that opposition to the CAB had come primarily from the area dominated by Assamese-speaking people of the Brahmaputra Valley where the BJP succeeded in retaining seven seats. It ceded one Nagaon seat to the Congress but snatched Diphu, a tribal seat from the Congress. The BJP also succeeded in snatching Silchar and Karimganj from the Congress and AIUDF respectively in Barak Valley, which had supported the CAB.

Even after violent protest and opposition, the BJP has also registered a significant gain in its vote share of 38.85 per cent of 2014, which came from 13 seats the party had contested. However, this time BJP had contested on only 10 seats but got 36.05 per cent. If the vote share is recalculated on all the seats, it has improved its vote share, which is more than 50 per cent of the total votes.

“The calls of Hiren Gohain and Akhil Gogoi who were spearheading the movement against CAB have been completely rejected. People know they are always talking nonsense and that is why they have so much of faith in BJP,” said the party spokesperson Rupam Goswami.

Another BJP spokesperson and treasurer of the party Mr Rajkumar Sarma said, “This has not only exposed political parties like the Congress and AGP but also the intellectuals, NGO activists and some Jatiya Sangthan too. These leaders and organisations who tried to provoke people against the BJP on the issue of CAB were outright rejected by the people who overwhelmingly voted for the BJP.” Asserting that they are irrelevant, Mr Sarma said that the media was equally responsible for misrepresenting the opinion of the common people.

However, civil society activist Paresh Malakar says, “Perhaps we were too comfortable with the help of the partisan media and hence could not understand the ground situation. We must work on the ground.” The CAB had also polarised the social media which was quite critical against those advocating the CAB.