UPA chairperson Sonia Gandhi is the lone Congress member to represent the party in the Lower House from this politically crucial state. 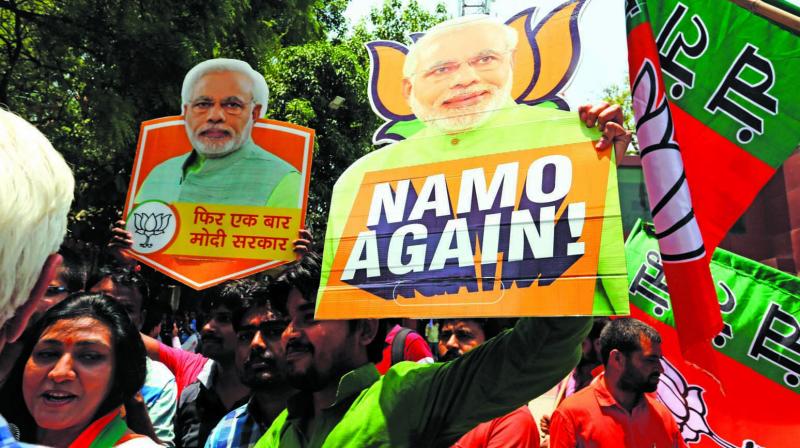 BJP workers celebrate at the party headquarters in Lucknow after the results were declared on May 23. (Photo: AP)

New Delhi: Notwithstanding the huge majority it got in the recently-concluded Lok Sabha elections, the BJP’s poll managers have now focused their attention on the Uttar Pradesh bypolls. With 11 MLAs, including two of the SP-BSP alliance, now members of Parliament, the state will go into election mode again. The BJP won 62 of the total 80 parliamentary seats, nine seats less than 2014, and its Apna Dal ally won two seats. UPA chairperson Sonia Gandhi is the lone Congress member to represent the party in the Lower House from this politically crucial state. From the SP-BSP-RLD alliance, which was being dubbed as a “formidable” alliance by the Opposition, 15 won, including five SP and 10 BSP members. Of the nine BJP MLAs who won, three are ministers in the Yogi Adityanath government.

A meeting of the RSS-BJP state core group will be held next week in Lucknow, where besides fine-tuning the caste combination of candidates, Sangh Parivar leaders will chart out the strategy to win the maximum numbers of seats. Though the Akhilesh Yadav-led SP and the Mayawati-led BSP are yet to announce whether their alliance along with the Ajit Singh-led RLD will continue and whether they will contest the bypolls together or not, the saffron party’s poll managers have already started holding meetings and will also consider the scenario of contesting the polls against the alliance. The saffron poll managers have also started going through names to start the selection process of its probable candidates.

It could be recalled here that in 2014, after the BJP won 71 seats in UP, the ruling SP won 12 of the 13 seats that went to the bypolls and the saffron party’s poll managers do not want a repeat of that scenario.

Sources said the Narendra Modi government’s major initiatives, including rural electrification, housing, Ujjwala and Mudra, among others, will be at the core of the saffron party’s election strategy for the bypolls. On its part, the Yogi Adityanath government has initiated the task of getting the maximum number of allocated quotas of the Centre’s popular schemes for his state. Three of the four ministers who contested the polls also won from their respective seats, including Rita Bahuguna Joshi, S.P. Singh Baghel and Satyadev Pacahuri.