Political analysts claim that the berths have been allocated keeping 2020 Assembly elections in mind. 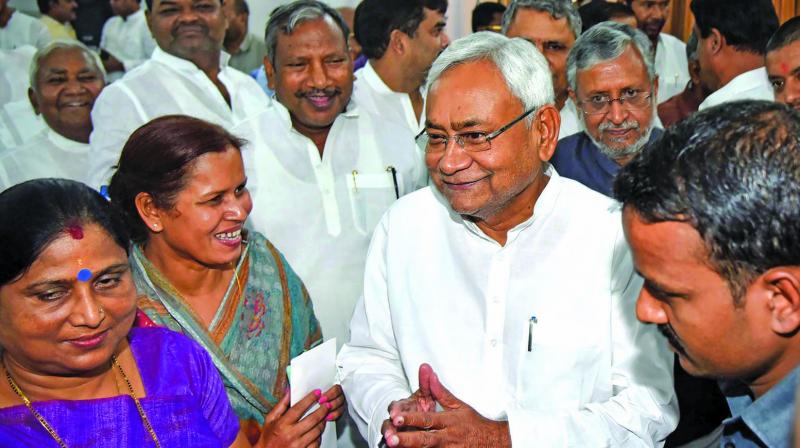 Patna: In a surprise move, Bihar chief minister Nitish Kumar on Sunday inducted eight JD(U) legislators into his Cabinet, overlooking NDA allies BJP and LJP in an expansion exercise that came just three days after differences forced the JD(U) to opt out of the Narendra Modi Cabinet.

Though seen as a snub to the BJP, the chief minister sought to play down the rift in the NDA. “There is no trouble with the BJP and everything is fine in NDA,” he told reporters.

He said that one berth was offered to the BJP but the party didn’t look too keen on joining the Cabinet.

This is the second time in two years when Mr Kumar has expanded his Cabinet. On July 29, 2017, he had inducted 27 ministers from all three NDA constituents — the JD(U), the BJP and the LJP.

The ministers inducted on Sunday included Shyam Rajak, Ashok Chaudhary, Sanjay Jha, Laxmeshwar Prasad, Bima Bharti, Ram Sevak Singh Kushwaha, Neeraj Kumar and Narendra Narayan Yadav. Five of them are MLAs while three are MLCs. With the latest expansion, the Cabinet’s strength had reached 33 against the permitted 36 in the 243-member Assembly.

Political analysts claim that the berths have been allocated keeping 2020 Assembly elections in mind. In the expanded Cabinet, Mr Kumar has included two from the upper caste, two from extremely backward caste, two from mahadalit and one each from Yadav and Kushwaha communities.

After the Cabinet expansion, Mr Kumar said, “Posts were lying vacant and since Assembly session is also likely to commence soon we decided to induct ministers into the state Cabinet.”

BJP leader and Bihar deputy chief minister Sushil Kumar Modi, who was also present during the oath ceremony at the governor house, tweeted, “Nitish Kumar has offered the BJP to fill the vacant seat. The BJP decided to fill it in the future.”

The development comes amid reports of a rift between the JD(U) and the BJP over-allotment of berths in the Union Cabinet.

Sources said that JD(U) opted out of the Union Cabinet to express its displeasure over being offered only one seat as part of “symbolic representation”.

The JD(U) is the third largest NDA ally with 16 Lok Sabha seats. The party was eyeing for “proportional representation” in the Union Cabinet but was disappointed over being offered on berth.

Political analysts are of the opinion that simmering discontent over the issue may cause unease among the two allies ahead of Bihar Assembly election which is due in 2020.