As per the IMD, Mumbai, Thane, Raigad and Palghar will be hit with winds of up to 100 kmph to 110 kmph with heavy to very heavy rainfall 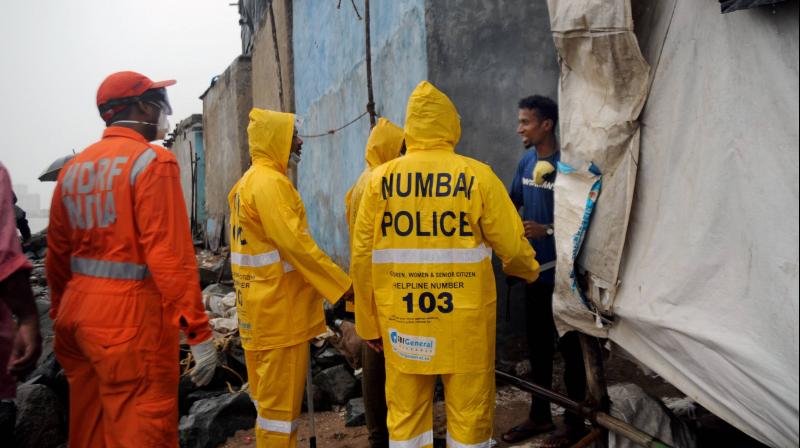 Mumbai: Hundreds of people living close to various beaches in Mumbai are being shifted to safer places on Wednesday in light of cyclone 'Nisarga' which has made landfall near Alibaug, 95 kms from here, police said.

Mumbai Police and Brihanmumbai Municipal Corporation (BMC) are taking all precautionary measures to minimise any damage likely to be caused by the cyclone, an official said.

"Hundreds of people living in areas near sea shores like Colaba in south Mumbai, Worli and Dadar in Central Mumbai, and Juhu and Versova in Western Mumbai, are being shifted to safer places by the BMC with the assistance of the police," the police official said.

As per the IMD, Mumbai, Thane, Raigad and Palghar will be hit with winds of up to 100 kmph to 110 kmph with heavy to very heavy rainfall.

A total of eight teams of the National Disaster Response Force (NDRF) have been deployed at Colaba, Worli, Bandra, Andheri, Malad and Borivali, the official said.

Five teams of the Indian Navy have also been stationed at various places in the city.

Police have beefed up security along the beaches in Mumbai, where section 144 of the CrPC has already been imposed.

"Mumbai, we have survived several storms together. This cyclone shall pass too. As always, just take all necessary precautions, follow the guidelines and dont believe in any rumours. Trust only official sources. Take care," Mumbai Police tweeted.