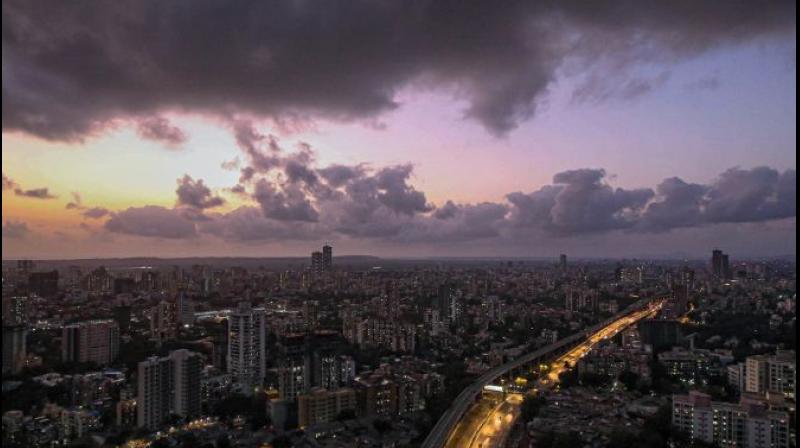 Dark clouds gather in the sky over Mumbai ahead of cyclone Nisarga, in Mumbai on June 2, 2020. (PTI Photo)

Mumbai: When cyclonic storm Nisarga is set to hit Mumbai this afternoon it would be the first such storm from the Arabian sea to make landfall in the city since 1891. At dawn this morning, the exact point of landfall was set at Alibaug in Raigad district in Maharashtra. The storm hovered over the Arabian Sea around 165 km south-southwest of Alibaug and 215 km south-southwest of Mumbai.

Mumbai hasn't "experienced a serious cyclone landfall since 1891", according to Adam Sobel, professor of atmospheric science at Columbia University.

Mumbai experienced severe floods in 2005, and more recently in 2017 and 2019, but none of them were due to cyclones.The India Meteorological Department (IMD) Mumbai's deputy director general of meteorology K S Hosalikar said the cyclone will cross close to south of Alibaug as severe cyclonic storm 100-110 kmph gusting at 120 kmph.

Movement of people along the Mumbai coastline has been prohibited from midnight to Thursday afternoon, the Mumbai police said. An order under section 144 of the Code of Criminal Procedure was being issued.

Maharashtra chief minister Uddhav Thackeray asked people to stay alert and spoke to prime minister Narendra Modi asking for assistance from the Union government. “Tomorrow (Wednesday) and the day after are crucial in coastal areas,” he said.

Over 21,000 residents in 22 villages in Maharashtra’s Palghar district will be evacuated. As many as 21,080 villagers from Vasai, Palghar, Dahanu and Talasari talukas, which are likely to be affected by the cyclonic storm, have been shifted to safer places, district collector Dr Kailas Shinde said.

The Chief Minister's Office (CMO) tweeted that precautions will be taken during relief work given the prevalence of Covid-19. “Out of the 16 NDRF units, 10 have been deployed for rescue operation during the cyclone, and six SDRF units are in reserve,” the CMO said in a graphic shared on Twitter.

IMD put out heavy rainfall warnings and rough seas for Mumbai, Thane, Raigad and Palghar. Mumbai city has already received moderate rainfall of 20 mm to 40 mm, while there was light rainfall in other parts of the megapolis during the past 12 hours. The railways have rescheduled special trains and many airlines have cancelled their Mumbai operations.The Central Railway has rescheduled, diverted and regulated some trains on Wednesday, an official said.

The cyclone has added to the difficulties of authorities in Maharashtra and Gujarat, both states suffering peak incidence of coronavirus infections. The two western states, with their health infrastructure under severe strain, have opened new fronts to tackle the fallout of the cyclone.

Prime Minister Narendra Modi spoke to their chief ministers on Tuesdsy and assured them all possible help from the Centre.Mumbai's town planning authority MMRDA said nearly 150 patients at its COVID facility in Bandra Kurla Complex (BKC) in Mumbai have been shifted to another location as a precaution in the wake of the cyclone.

The Navy has has kept five flood teams and three diving teams on stand-by in Mumbai, the official said.These teams, trained and equipped for rescue operations, are stationed at various naval areas across Mumbai and can provide early response over a larger area, he said.

"We have evacuated more than 3,500 people from koliwadas (fishermen colonies) and temporary houses to safer structures like schools, community halls and government buildings," superintendent of police Raigad, Anil Paraskar said.