India   All India  03 Jul 2017  Have attacked India before, can target anytime we want: Hizbul chief Salahuddin
India, All India

Have attacked India before, can target anytime we want: Hizbul chief Salahuddin

Salahuddin, designated as a 'Specially Designated Global Terrorist' by US said they can target any place in India at anytime. 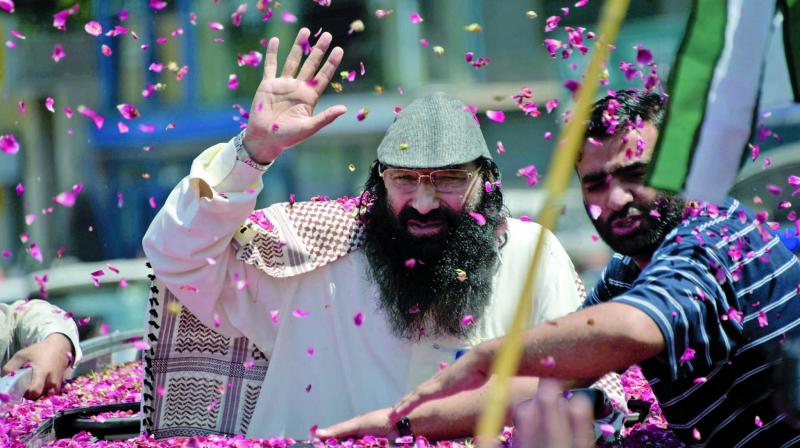 Lahore (Pakistan): Hizbul Mujahideen Chief Syed Salahuddin, who has been branded as a 'global terrorist' by the United States, admitted in a TV interview to having carried out terror attacks on Indian soil.

"Till now our focus was on Indian occupation forces. All the operations that we have done or are underway, we focus only on the installations of these occupational forces," Salahuddin said in an interview with Geo TV.

Asserting that Kashmir was his 'home', the Hizbul chief stated that the Valley was witnessing an uprising since the killing of Burhan Wani.

Further revealing that he has many supporters in India, Salahuddin admitted to purchasing weapons from international markets, adding that he has the capacity to deliver weapons at any place if he is paid for it.

Informing that he carried out many 'operations' in India, Salahuddin stated that the international scenario changed after 9/11.

"If we would have taken our operations out of Kashmir at that time, India would get a chance to label Kashmir-e-Tehreek a terrorist organization. We have support and we can target any place in India, at anytime," he said.

On June 26th, the US Department of State designated Salahuddin, as a 'Specially Designated Global Terrorist'.

"Department of State has designated Mohammad Yusuf Shah, also known as (AKA) Syed Salahuddin, as a Specially Designated Global Terrorist (SDGT) under Section 1(b) of Executive Order (E.O.) 13224, which imposes sanctions on foreign persons who have committed, or pose a significant risk of committing, acts of terrorism that threaten the security of US nationals or the national security, foreign policy, or economy of the United States. As a consequence of this designation, US persons are generally prohibited from engaging in transactions with Salahuddin and all of Salahuddin's property and interests in property subject to United States jurisdiction are blocked," the State Department said in a statement.

Salahuddin is the senior leader of the militant group Hizbul Mujahideen. In September, 2016, Salahuddin vowed to block any peaceful resolution to the Kashmir conflict, threatened to train more Kashmiri suicide bombers, and vowed to turn the Kashmir valley "into a graveyard for Indian forces."

Under Salahuddin's tenure as senior Hizbul leader, the terror outfit has claimed responsibility for several attacks, including the April 2014 explosives attack in Jammu and Kashmir, which injured 17 people.