BJP accused the ruling Trinamool Congress (TMC) of orchestrating killing, the charge was rubbished by the party. 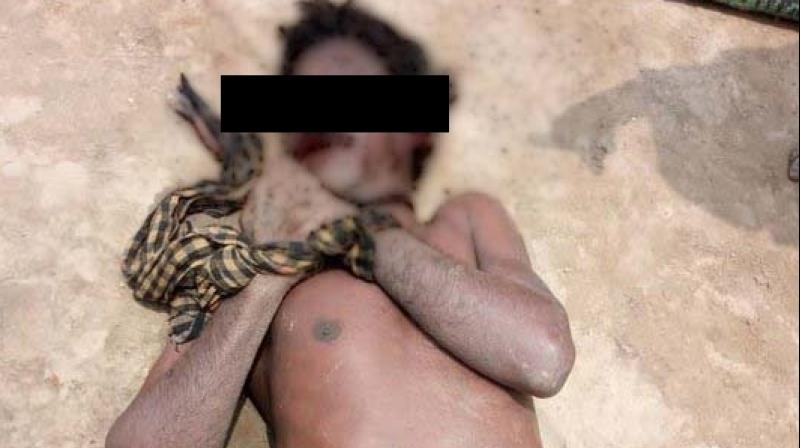 Dhormo Hazra, missing since Sunday, was found on the surface of the water body close to his village in Taldanga area of the district on Monday, a police officer said on Tuesday. (Photo: Amit Shah | Twitter)

Kolkata: The body of a 52-year-old man, whom the BJP claimed as its worker, was found floating in a pond in Murshidabad district, triggering a fresh war of words between the saffron party and the ruling TMC.

Dhormo Hazra, missing since Sunday, was found on the surface of the water body close to his village in Taldanga area of the district on Monday, a police officer said on Tuesday.

Police have launched an investigation into the incident, but no arrests have been made so far, he said.

Coming close on heels of the killing of three persons, reportedly associated with the BJP, in Purulia as a fall out of the recent rural polls, the Murshidabad death has sparked off a political blame game.

While, the BJP accused the ruling Trinamool Congress (TMC) of orchestrating his killing, the charge was rubbished by the party. West Bengal BJP general secretary Sayantan Basu, who is presently in New Delhi, said he along with Mukul Roy met union Home Minister Rajnath Singh and complained about the incident.

"We have informed Rajnathji about the incident. Its shameful that TMC has taken up the politics of annihilation to eliminate its political enemies," Basu said.

The family members of Hazra were targeted by TMC for last few years and his brother was arrested few days ago in a false case, he claimed.

"TMC shames humanity, yet again. Another BJP karyakarta killed in the most barbaric manner. In Mamata's regime, West Bengal has become an epitome of violence and brutality. Entire BJP stands firmly with Dhormo Hazra's family in this hour of grief. My deepest condolences," BJP president Amit Shah said in a tweet.

BJPs district president (north) Gouri Shankar Ghosh alleged Hazra was receiving threats from goons associated with TMC since the panchayat polls. However, the Trinamool Congress refuted all the charges.

The TMC in a statement said BJP should stop making baseless allegations.

They should either prove what they are claiming or face a defamation suit. "Presenting judge, jury, executioners of #NewIndia - @bjp4bengal @amitshah @dilipghoshBJP @supriyobabul shamelessly spreading lies about #Bengal Their worker died but even before any investigations carried out they concoct. Not waiting for autopsy report? Prove or face defamation," the TMC said in a statement.

To improve its tally in the upcoming general elections in the state, the BJP, which at present has two MPs from West Bengal, is sparing no opportunity to pin the TMC. The saffron party has made steady inroads in various districts and has emerged as the main opposition party in the state after recent three-tier panchayat elections and assembly by-election at Maheshtala.

Addressing a public meeting in Purulia on June 28, BJP chief Amit Shah had lashed out at West Bengal Chief Minister Mamata Banerjee for "unleashing violence" on her political rivals.

He had said that the sacrifice of his party workers will not go waste and it will win 22 of the state's 42 Lok Sabha seats in 2019.