India   All India  03 Jul 2019  TRS unhappy on KCR's non-inclusion in committee of CM's on agriculture
India, All India

Central Government had on July 1 appointed Maharashtra Chief Minister Devendra Fadnavis as the convener of the high-powered committee. 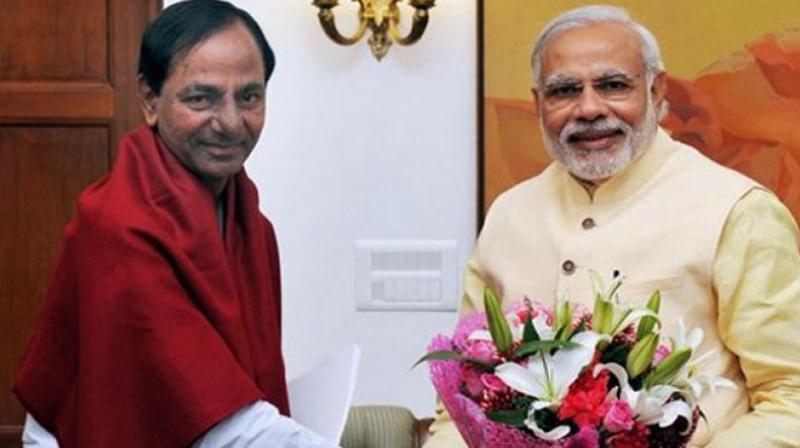 TRS said the BJP-led NDA government has replicated the Rytu Bandhu scheme under which farmers are given financial assistance. (Photo: File)

Hyderabad: The ruling TRS Wednesday flayed the NDA government for not including Telangana Chief Minister K Chandrashekhar Rao in the high-powered committee of Chief Ministers on Transformation for Indian Agriculture, saying his expertise in farmers' welfare would have aided in development.

"All these experiences (many schemes implemented by Rao in Telangana) would have been definitely better utilised had he been there in the committee.

He would have contributed towards the development and given ideas for the betterment of farmers," Telangana Rashtra Samithi spokesperson Abid Rasool Khan said.

The union government had on July 1 appointed Maharashtra Chief Minister Devendra Fadnavis as the convener of the high-powered committee.

"I will not say that the Centre needs to reconsider its decision, but that his presence in the committee would definitely have benefited the country and not just farmers and agricultural growth, he said.

The nine-member committee, including Chief Ministers of Uttar Pradesh, Karnataka, Madhya Pradesh, Haryana and Gujarat, will submit its report within two months.

Khan claimed that various programmes like Rytu Bandhu, 24-hour power for farmers for agriculture and water management taken up in Telangana for agricultural development had "path-breaking results" and were appreciated throughout the country.

He said the BJP-led NDA government has replicated the Rytu Bandhu scheme under which farmers are given financial assistance.