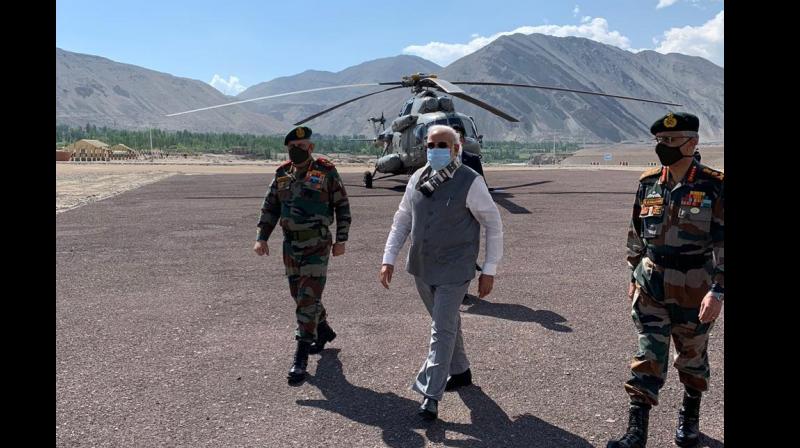 Saluting Indian jawans for their bravery against the Chinese army in the ongoing border skirmish with China, Prime Minister Narendra Modi on Friday said expressed confidence that the country will continue to be in safe hands as long as valiant jawans guard the border.

While addressing soldiers in Ladakh, Modi said: "Your courage, your bravery and your sacrifice for the motherland is supreme. Your life is not less than anyone in the world. The difficulties with which at this elevation you are protecting the motherland and serving India, no can match up to that in the entire world".

Modi also expressed his desire to maintain peace with China, albeit without mentioning the country, and added that only a strong and brave nation can pursue peace. "Those who are weak can never initiate peace, bravery is a pre-requisite for peace. The whole globe has seen and understood India's pledge for world peace. We have always worked for humanity," he said.

The prime minister visited one of the forward locations in Nimu and interacted with personnel of the Army, Air Force and ITBP. He also visited a military hospital in Leh to meet soldiers injured in the hand-to-hand skirmish.

Located at 11,000 feet, Nimu is among the toughest terrains, on the banks of river Indus and surrounded by the Zanskar range.

Reacting to PM's visit to Ladakh, a rattled China urged restraint from India. "India and China are in communication and negotiations on lowering the temperatures through military and diplomatic channels. No party should engage in any action that may escalate the situation at this point," Zhao Lijian, Chinese Foreign Ministry spokesperson, was quoted by news agency ANI as saying.

In his monthly "Mann ki Baat" radio address on Sunday, the prime minister had asserted that India has given a befitting reply to those who cast an evil eye on its territory in Ladakh.

He had said while the country honours the spirit of friendship, it is also capable of giving an appropriate response to any adversary. Paying tributes to the 20 Army men killed in the violent stand-off, Modi had also said India's brave soldiers have shown that they will not allow the nation's pride to be hurt.